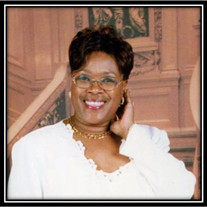 SHIRLEY ELAINE MARSHALL JOHNSON was the only child born to the late George G. and Virginia Marshall on March 9, 1941 in Baltimore, Maryland. Shirley departed this life on January 24, 2022 after a lengthy struggle with dementia. LIFE SUMMARY Shirley was an inquisitive and outgoing child who was very engaged with her family. Her grandmother Alberta Williams was a huge influence in her life. She aspired to emulate the positive qualities of womanhood she saw in her grandmother. Growing up, Shirley received her First Communion and was raised in the Catholic Church. Later in life, she chose to unite with her grandmother for worship and fellowship at the Metropolitan United Methodist Church in West Baltimore. She was a member of the Altar Guild and during Black History months, she organized popular book and author activities for the African American Discipleship Ministry. Shirley’s formal education was temporarily halted when she became a young mother to her beloved son, Melvin. Shirley was a doting mother who looked after every need of her child. Encouraged by her family, Shirley set goals for herself and her young son. First on her list of goals was to complete requirements for a GED; which she happily achieved. Shlriey’s marriage to Edward Johnson in 1971 ended in divorce. Shirley found her niche when she joined the staff of the Enoch Pratt Free Library in 1969. Her first job was as a beginning level clerical assistant. This fresh start and job opportunity was the beginning of a very motivated career that spanned forty-six years. As Shirley’s educational achievements grew, so did her promotions and levels of responsibility at the Pratt Library. Topping off her career, Shirley served as branch manager for several branches, culminating her tenure at the Edmondson Avenue branch, where she assisted in overseeing capital library renovations in 2004. Shirley worked diligently for the library and was honored to be active nationally with the American Library Association (ALA); Black Caucus of the American Library Association (BCALA); Public Library Association (PLA). She was also a member of the Maryland Library Association (MLA). In 1994, Shirley was the recipient of the Esther J. Piercy Award, a very coveted prize in the library community. Shirley’s passion though was the work she did daily, addressing the learning and recreational needs of the communities she worked in. The book clubs Shirley established were legendary. She often brought in authors to speak, and of course there was always food. Many of Shirley’s book club members became her friends who she saw socially and at the library. Shirley retired in early 2015. In addition to Shirley’s formal education, she received an Associate of Arts degree from Community College of Baltimore; Bachelor of Arts degree from University of Baltimore; Library Associates Training Program Certification; Master of Library Science, University of Pittsburgh. Shirley loved life. She loved to travel and was able to see much of the United States and Canada, and some parts of Spain. However, her greatest travel love was the Caribbean. Her favorite destinations were Jamaica and Barbados, memories which she seemed to cherish well into her illness. Shirley had lots of friends, and she gathered with them regularly to travel, eat out, attend theater, go dancing, shopping, concerts, etc. Many of her book club participants were social friends too. Shirley was a good friend. She was always the first to send cards for holidays and special occasions. She loved her buddies, and we all loved her. She will be missed in so many ways. Shirley had a style and presence that was always tasteful and polished. Her well-coiffed hair was a standard in her grooming and lovely for the world to see. Shirley was preceded in death by her son, Melvin Davis; parents, George and Virginia Marshall; and her grandparents, Charles and Alberta Williams. Her small family is once again reunited with our God, in Christ. Shirley is survived by a host of couisins, many friends and acquaintances. Although Shirley has joined another realm of existence, her spirit, light and love will always be with everyone whose lives she touched.

SHIRLEY ELAINE MARSHALL JOHNSON was the only child born to the late George G. and Virginia Marshall on March 9, 1941 in Baltimore, Maryland. Shirley departed this life on January 24, 2022 after a lengthy struggle with dementia. LIFE SUMMARY Shirley... View Obituary & Service Information

The family of Shirley Elaine Johnson created this Life Tributes page to make it easy to share your memories.

SHIRLEY ELAINE MARSHALL JOHNSON was the only child
born to the...