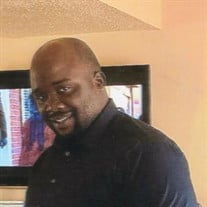 Shevan Ceoartland Rochester beloved son, brother, father and friend was born on October 30, 1989 in Kingston Jamacia to the parents of Dionne Pinnock and George Rochester. Shevon education began in Jamaica, where he attended Carmel Basic School, then to St. Andrews primary school. In June 1997 at the age of eight he and his mother migrated to the United States and resided in Bronx, New York. He continue his education at PS 89. Shevan attended New Testament Church of God on Seymour Avenue where he accepted the Lord Jesus Christ as his personal savior at the tender age of 10 and was baptized, rededicated his life to the Lord November 2011, at Meadowood Church of God. In November 2003 Shevan, and his mother relocated to Richmond, Virginia where he continued his education in attendance Moody Middle, then to L. Douglas Wilder Middle. He attended and graduated from Henrico High School. Shevan's first job was at the age of 14 years old where he started with fast food companies and has never stopped working. His career path blossomed and he acquired several certifications. Shevan was a jack of all trades but master of none. He took whatever task, job, hobbies seriously and he gave it his all and made sure it was done right. It was on his last job that he lost his life. Shevan did not accept defeat. He was hungry to learn and acquire more. He was a certified Auto Mechanic, Certified Nursing Assistant, American Traffic Safety Services Association, CPR/First Aid Certification and Depart of Criminal Justices Services (DCJS) Certified Security Officer. When Shevan, lost his rights he struggled to acquire a job. He was determined to become a better person and not repeat his past mistakes. With the help of his mother, he got his rights were fully restored allowing him to function as a productive citizen and became an entrepreneur of TOP FLIGHT SECURITY. Shevan may have never attended-church like his mother wanted him to but God gave him a gift of servanthood and whether he realized it or not he fulfilled his calling. Shevan gave not only of himself but his time, and resources to anyone. Shevan was a member of the car club where they served meals to the homeless, he contributed financially to several charities and organizations. He opened his home to friends and family members or anyone who needed a place to stay in order to jumpstart or re-jumpstart their lives or career path. He answered the call of friends who needed something to be repaired in their homes, on their cars, or even just to go somewhere. Shevan became a big brother at the age of fifteen where he openly displayed his love and affections for his brother Kyle. He later took on the role as a dad to his younger brother. Shevan became a dad at the age of twenty-seven, when his daughter, Heaven Rochester was born and who is now 5 years old. At the birth of his daughter, he vowed never to abandon his child and to be ever present in her life and that he did with pride and joy. Not only was Shevan, an attentive, and great dad but he was also a loving and protective brother. He was a provider and a true friend, he was goofy, worrisome (oh my Lord Shevan could pluck your nerves) and he loved his momma. Shevan Ceoartland Rochester was a son, brother, father and friend. He leaves cherish his memory, his beloved mother, Dione Pinnock; his grandmother, Gritley Health (she called him Bull); his aunt Patricia Allen; his brother Kyle Brissett, and his only child, Heaven Rochester; cousin and a host of other relatives and friends. Shevan, affectionately known as "Von" or Jamaica despised by few but loved by many, will be greatly missed but never forgotten.

The family of Shevan Rochester created this Life Tributes page to make it easy to share your memories.

Send flowers to the Rochester family.