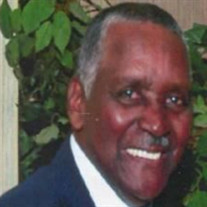 HEDRICK EDWARD CAIN, SR., beloved husband of Helen Mayers Cain, departed this life on October 18, 2021. He was born April 4, 1930, in Lancaster County, Virginia to the late Shedrick E. Cain and Delilah Rich Cain. Deacon Cain, the eldest of four siblings, attended A.T. Wright High School and joined Sharon Baptist Church in Weems, VA at an early age. He will be fondly remembered as a dedicated servant of the Lord throughout his entire life; always setting an example to his children what it means to commit yourself to Christ. He began his career in Weems, VA with a truck hauling business and also enjoyed hunting and farming. Following the footsteps of his best friend, Captain Mathews Gaskins Sr., (Sonnyboy), Deacon Cain was also captain of a Menhaden fishing vessel out of Reedville, VA where they cast their fishing nets off the shores of the Atlantic Ocean down to the Gulf of Mexico in Louisiana. Being away from their families for four months at a time, the crew would sing a medley of chanteys as they hauled in their catch. They caught the eye of Alan Lomax, music producer. (See pic below: Bright Light Quartet & GA Island Singers on film set in Williamsburg) Later, he and a group of friends from Lancaster County formed a singing group called The Bright Light Quartet, their music was gospel and folk songs recorded by Alan Lomax. “Sweet Roseyanne” was a chart hitting single off their first album in the early 60s that was later picked up and sung by the world-renowned folk singers Pete Seger and Arloe Guthrie. Another favorite gospel song by the group was “Christian Automobile” -- Prayer is your guide—Faith is your steering wheel.” (See pic left) from left to right at the top: Lawrence Hodge, Shedrick Cain, Arnold Fisher, James Campbell; bottom row: Robert Beane and Joe Laws.) Early 1960, Alan Lomax was commissioned by the City of Williamsburg, VA to produce an educational film called “The Music of Williamsburg. The Bright Light Quartet was one of two groups who sang for the film’s sound track. Mr. Lomax’s movie Collections and interviews of his Journey thru the South can be found in the Library of Congress Archives. Deacon Cain and his brother Willard Cain, cousin Elias Taylor and others formed a gospel group out of Baltimore known as The Metropolitanaires (see pic below) where they published and produced an album “Solid Rock” and CD still being widely played around the world. The song “Stand Still Jordan” became the most widely requested song for him to perform. When he moved to Baltimore, he joined Mt. Zion Hill Baptist Church where he sang on The Men’s Chorus and served as Chairman of the Board of Deacons. He was also self-employed with a taxi service for more than thirty years and after relinquishing the taxi service, he used his personal vehicle and continued to transport his most dedicated clients up until his recent illness. He is preceded in death by his sisters Delilah Carter, Carrie Beale, and a daughter Schanden Cain Bowers. He is survived by his wife, Helen Cain; brother, Willard Cain Sr. (Bubba); four children from his previous marriage, Gwendolyn Cox (Jimmy), Deacon Shedrick Cain Jr., (Marla), Sharon Cain Amar, Sharold Smith (Ronald); stepdaughter, Marcie Mayers; and a host of grandchildren, great-grandchildren, great-great-grandchildren, nieces and nephews.

The family of Shedrick Edward Cain Sr created this Life Tributes page to make it easy to share your memories.

Send flowers to the Cain family.