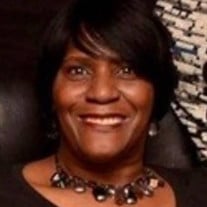 Sharon D. Bradford (Born Sharon D. Brown) The daughter of William Brown and Jessie Brown was born on January 3, 1955 in Baltimore Maryland. She departed this life on May 2, 2022 Sharon received her education within the Baltimore City Public Schools where she took up Cosmetology; Sharon worked at the Coca-Cola Company for many years until her job moved and she worked numerous of jobs until she retired. Sharon was a very sweet loving and caring person that no matter what she was going through she was always there to listen and give good advice. Sharon meant what she said and said what she meant. She would brighten up a room wherever she went, she was best known for her good cooking, smooth ponytails, slick finger waves and fly clothing and let’s not forget about her eyelashes. Sharon loved the Lord with all her heart and soul, she loved her children, grandchildren, and was a blessing to her entire family and friends. If Sharon said she loved you best believe that she did, she didn’t just say it she showed it. Proceeding her in death is her Mother Jessie Brown, Father William Brown, Brother William Brown and Daughter Tyra Dailey. She leaves to mourn her Husband Anthony Bradford, her two children Tarsha and Timothy, 6 Grandchildren, Anthony, Antonio, Malik, Azaria, Zaire and Zion, two sisters Laverne and Karen, 6 Brothers, Edward, Tyrone, William, Clayton, Aaron and Quentin, One Aunt, Shirley Thomas, Stepmother Rona, One Daughter in love Nneka Nelson, One Sister in Love Dorothy. One adopted Daughter Takisha, One Grand-dog Milo and a host of Nieces, Nephews, Cousins and Friends.

Sharon D. Bradford (Born Sharon D. Brown) The daughter of William Brown and Jessie Brown was born on January 3, 1955 in Baltimore Maryland. She departed this life on May 2, 2022 Sharon received her education within the Baltimore City Public... View Obituary & Service Information

The family of Sharon D Bradford created this Life Tributes page to make it easy to share your memories.

Send flowers to the Bradford family.