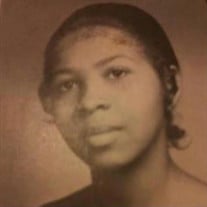 Sharon “Big Ma” Louise Arnold passed away peacefully on November 22, 2021, to be with the Lord at the age of 67. She was surrounded by her children, mother, sisters and brothers, and devoted friends who never left her side as she transitioned from life on earth to her everlasting home. Sharon Louise (Stout) Arnold was born on January 11, 1954, in Lexington, Ky to Donald Stout and Dorothy (Stout) Clark. Early in life Sharon was raised in the church by a closely knit family who so adored her. Her maternal grandparents James and Gertrude (Shelby) Jackson became so affectionately fond of her that they nicknamed her “Spoogecake”. In the late 1950’s, Sharon’s father received orders from the military to be reassigned, which led her, and her family to relocate to Lexington Park, Md. This is where Sharon grew up, thrived, captured childhood memories, life lessons, and made lasting friendships. As the oldest of her siblings and some cousins, Sharon made sure that everyone was well taken care-of. Sharon participated in many activities in school as a child, but her love of music led her to join her high school marching band. Sharon became a very talented flute player in the band and graduate with honors from Great Mills High School in Lexington Park, Md. Sharon not only had a loved for music and taking care of people, but she also sparked a loved for animals at a younger age. While in high school, she took her first job at a veterinary hospital. On one fateful day, the family dog, “Alexander” was hit by a car and without a thought, Sharon’s first reaction was to save her dog’s life. Without hesitation, she figured out the diagnosis of her dog’s injuries and sewed him up in the middle of the street in her neighborhood and saved his life. This was her calling and without a doubt, Sharon then realized saving lives was the beginning of her journey. After graduating from high school, she planned to attend college, but in years to come, so many obstacles were placed in her way. Sharon was still on her calling mission to saving lives, but the later part of the 1970’s proved to be very tumultuous, but fate intervened and changed her fate. With the encouragement, mentorship, motivation, and encouragement from a close family member, Clarence E. Arnold, Sr., renewed her motivation to pursue her dreams. Sharon would later attend John Tyler Community College in Chester, VA where she earned her degree in nursing. Her first job out of college was at a nursing home. She would later relocate to Richmond, Va in 1980, where she would put down roots, built lifelong friendships and enroll into a surgical technologists nursing program. Her first job as a surgical-scrub technician nurse began at Johnston-Willis Hospital where she worked for several years. She then went on to work at other hospitals in the operating room in the area, but in the 1990’s, she decided to take a leap of faith and become a travel nurse. The next 20 years proved to be very rewarding for her career, from traveling and working at various prominent hospitals in the United States. Through her experiences and adverse specialized training, she mastered and became an expert in the field of robotics surgery, trauma, pediatric and open-heart surgeries. Although Sharon endured many life journeys and career milestones, her proudest moments in life entailed her children and grandchildren that she really adored. Her love for family was valued at #1 on her list. She ensured a positive upbringing infused with family values and faith in God. She would bring her children up in the church by attending church every Sunday, bible studies, and vacation bible school. She didn’t only have a strong heart for her children and grandchildren, but she would often take-in and extend her love to friends, family, and others in need. The magnitude of how many lives she touched or saved, go uncounted for, only God knows. She was very wise and a God-fearing woman who enjoyed life and lived it to its fullest. A hero among heroes to many, her commitment and duty to others will always be remembered. An extraordinary life for an extraordinary “Phenomenal Woman”. This was her journey, strong-willed & determined, Sharon won her battle because she courageously never gave up her fight, instead she went on an extended vacation and traveled to her next Destination…All Aboard to the Gates of Heaven. Sharon “Big Ma” Louise Arnold meant so much to so many people. We were truly blessed to have learned so many valuable life lessons from our Mom, Grandmother, Great-Grandmother, Sister, Aunt, and Friend. Resilience, Perseverance, Fortitude, and Gratitude are words that described the hero Sharon was destined and always will be. May we all honor her spirit through eternity. Sharon “Big Ma” Louise Arnold is survived by her six loving children, daughters Tardra Stout, Rhakeba Arnold, Shawana Arnold, son Xkoshan Arnold (Idene), daughter Segade Clements, son Tomias Arnold. A devoted granddaughter Shayquante’ Hawley, eleven grandchildren: Darrian Wimbush, Nakira Christmas, Neicoh Adams, David Sanchez III, Carmen Gevshenian, Niyahna Hawley, Todshira Jones, Tiana Jones, Violet Arnold, Syncere Carter, and Journei Arnold; two great-grandchildren Kenneth Ruff III, and Nadia Hawley. She was preceded in death by her father, Donald Stout. She also leaves to cherish her memory, mother Dorothy J. Clark. Her siblings Chandra M. Swan, Donna Johnson (Edward “E. J”), Barry Stout, Keith Stout (Mary), and Marty Stout and a host of family and friends. Thank you for helping us carry on her memory now & forever.

Sharon &#8220;Big Ma&#8221; Louise Arnold passed away peacefully on November 22, 2021, to be with the Lord at the age of 67. She was surrounded by her children, mother, sisters and brothers, and devoted friends who never left her side as she... View Obituary & Service Information

The family of Sharon "Big Ma" Louise Arnold created this Life Tributes page to make it easy to share your memories.

Send flowers to the Arnold family.