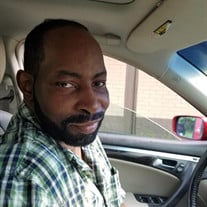 SEAN CARLTON PERKINS was born December 9, 1967, in Baltimore, Maryland, to the late Mattie Perkins and Rev. Toliver Perkins, Jr. On April 16, 2021, Sean received his call to eternal rest. Sean accepted Christ as his Lord and Savior at an early age at Shining Star Baptist church in Baltimore, Maryland and was baptized under the leadership of his father the Pastor. Sean joyfully labored alongside his parents to serve in God's vineyard in various capacities, including but not limited to singing on the choir, serving as an usher, and recording church services. Sean received his education in Baltimore City public schools and graduated Lake Clifton High School in 1985. He worked in the filed of auto mechanics after graduating from Lincoln Technical Institute in 198/7. He was employed by HUMCO, Inc. for approximately 15 year. Sean worked in other mechanical jobs including one where be miraculously survived being accidently electrocuted due to a fallen wire. However, his most cherished work experience was the business venture that he shared with his father. Together, they employed others, who along with themselves, sold Cotton Candy and water mostly at sporting events including: Orioles baseball and Ravens football games; basketball and football games at Morgan, Bowie and Coppin State Universities; and at other social events across Baltimore City and vicinity. Sean is known no family and friends for his humor, his laugh and his "side-ways" smile. His humor and way of being were often compared to the television show and character, Martin; even down to the dance, which were his characteristics long before the show's existence. Sean could also make you cry as easy and as much as he would make you laugh. Whenever he shared words of expression or acknowledgement, for any occasion, there would not be a dry eye in the room! Sean deeply loved family and particularly children who would gravitate towards him even if they did not know him. Sean was preceded in death by his beloved mother, Mattie Perkins, and his granddaughter Khloe Player. Sean leaves to celebrate the memories of his life: daughters, Teshawn Perkins and Shawna Perkins; Father, rev. Toliver Perkins Jr., Grandchildren, Kollin and Kaelynn Player, Avah Nicole Hill; sisters, Sharon (Leon) Pinkney and Shawanda Perkinsp; Niece April Perkins; Nephew, Kent Davis, Jr.; Uncles and Aunts; great-nieces and great nephews, a host of cousins, Life-Partner Tarsha Carroll and family (mother Leah Newby, daughter Quierra Gilchrist); God-daughter Peyton Motley.

SEAN CARLTON PERKINS was born December 9, 1967, in Baltimore, Maryland, to the late Mattie Perkins and Rev. Toliver Perkins, Jr. On April 16, 2021, Sean received his call to eternal rest. Sean accepted Christ as his Lord and Savior at an early... View Obituary & Service Information

The family of Sean Perkins created this Life Tributes page to make it easy to share your memories.

Send flowers to the Perkins family.