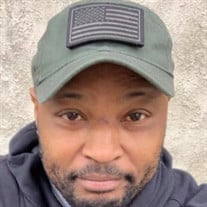 SEAN JERARD HARKLESS, 45, was born on January 29, 1976 in Baltimore, Maryland to the late Gerald and Cynthia (Sparrow) Harkless. He departed this life on Tuesday, November 2, 2021 at his home. Sean received his formal education in Maryland. He was a 1994 graduate of Glen Burnie High School. After graduating high school, Sean went on to further his education by attending Anne Arundel Community College, then later deciding on a career with the United States Military. In 1995, Sean entered the United States Army where he served with valor and honor until 2009. During his military career Sean traveled the world, visiting many places including Cuba and Iraq. Sean's military honors include: a Global War on Terrorism medal, an Overseas service ribbon, an Armed forces reserve medal and a parachutist badge. Sean had a strong sense of adventure and made friends wherever he went. An only child, he was especially close to his cousins, spending many family vacations with them in Ocean City, Maryland. He enjoyed going to the beach, eating crabs, hanging out on the boardwalk and driving go carts. He was also a gamer who loved a spirited game of Call of Duty every now and then. Sean leaves to cherish his memory: two sons, Christan Roach of Maryland and Samuel Nogueira of Fortaleza, Brazil, one daughter, Amylia Harkless of Maryland; an aunt, Wanda (Sparrow)Daney, great aunt Frances Harris, two uncles Warren Sparrow and George Jones, great uncle Bernard Williams, Jr., and a host of loving cousins, relatives and dear friends.

SEAN JERARD HARKLESS, 45, was born on January 29, 1976 in Baltimore, Maryland to the late Gerald and Cynthia (Sparrow) Harkless. He departed this life on Tuesday, November 2, 2021 at his home. Sean received his formal education in Maryland.... View Obituary & Service Information

The family of Sean Jerard Harkless created this Life Tributes page to make it easy to share your memories.

Send flowers to the Harkless family.