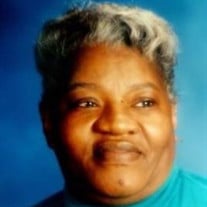 Sarah Roberta Diggs was born in Portsmouth, Virginia to the late James Deloatch and Lillian Elizabeth Pullum. Sarah began her earthly journey on November 29, 1936. After a lengthy but valiant fight, she finished her course and transitioned to her heavenly home on May 15, 2021. Sarah received her education in Portsmouth public schools. She had a love for young people and often volunteered in Portsmouth community schools as an adult. She later moved to Baltimore where she continued her service in the school system; she worked as a cafeteria aide and office assistant until she retired after more than 30 years of employment. Sarah was like a mother to many of the students because she both nurtured and disciplined them. She loved her job and build lasting relationship with students, their families and her her co-workers. On November 2, 1956, Sarah wed Herbert George Diggs. From this union came 10 children. In 1969, the family relocated from Portsmouth, Virginia to Baltimore, Maryland. Sarah and Herbert followed God's command to "raise your children in the fear and admonition of the Lord" (Eph. 6:4). Sarah set a Godly example by feeding anyone that was hungry (whether adult or child), sharing whatever she had, and giving Godly counsel. Her kind and caring manner drew many and everyone felt welcomed in her circle. Sarah loved to travel. She and Herbert often went on bus trips. She loved arts and crafts, especially ceramics, and many of her creations are proudly displayed in her home. Most of all, Sarah loved to spend time with her family. Spontaneous cookouts, family dinners, and impromptu gatherings were not uncommon. Sarah doted over grandchildren and great grandchildren passing out sweet treats, talking "baby talk" and giving them affectionate pet names. Sarah loved the Lord from an early age and was active in many churches throughout her life. She served in many church auxiliaries including vocal choir, mother's board, senior choir, and Sunday school. In her later years she joined the Bibleway Christian Fellowship Church, where she was a faithful member until her illness no longer allowed her to attend. She was a woman dedicated to her faith and strived to illuminate Christ in her walk. Her life was truly a testament. Sarah was preceded in death by two children: Marie Brodie (Anthony) and Herbert Nathaniel and three brothers: Charles Daughtry, Herlin Deloatch, and James L. Deloatch. She leaves to mourn: her devoted husband of 64 years, Herbert; eight children: Marilynn, Sharon, Carolyn, Thaddaus, Vernetta, Evelyn Alston (Gary), Evelina, and Cynthia; two sisters: Carolyn Deloatch and Mary D. Lawrence; 26 grandchildren, 36 great grandchildren; seven great great grandchildren; and a host of nieces, nephews, cousins, other family, and friends. In addition Sarah was blessed with a second set of sibling including five brother: George, Willie, Millar, Bruce, and Warren and five sisters: Doris, Annie, Mary H., Elma, and Charlotte.

Sarah Roberta Diggs was born in Portsmouth, Virginia to the late James Deloatch and Lillian Elizabeth Pullum. Sarah began her earthly journey on November 29, 1936. After a lengthy but valiant fight, she finished her course and transitioned... View Obituary & Service Information

The family of Sarah Roberta Diggs created this Life Tributes page to make it easy to share your memories.

Sarah Roberta Diggs was born in Portsmouth, Virginia to the late...

Send flowers to the Diggs family.