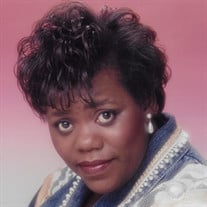 SANDY DUBLIN JENKINS was born on April 10, 1946 in Baltimore, Maryland to the late Eleanora E. Johnson and Samuel Dublin, Sr. Sandy departed this life suddenly on February 8, 2022. Sandy was educated in the Baltimore City School System graduating in the top of her class from Frederick Douglass Senior High School in hopes of becoming a nurse. She briefly pursued this effort as a “Candy Striper” for Franklin Square Hospital. Sandy’s loving heart led her to become a mother in her young adult years providing a loving home to a daughter Zelline, who was given to her by God to raise as her own. Later, she married the late William Jenkins and from this union a daughter Lesley was born, and to include in this blended family a daughter Selina, son James, and son the late William Jenkins, Jr. Her nurturing ways was evident in the love and care she provided to every family member who was blessed to be graced with her presence. Sandy worked as a seamstress for London Fog and Misty Harbor and after the discontinuation of sewing factories in Baltimore City, Sandy decided to change careers becoming a Youth Counselor for Family and Children’s Services of Central Maryland’s Jane Egerton House, where she provided guidance and care for many of Baltimore’s troubled and abandoned female youth for many years until she retired. She was honored by the Mayor’s office for outstanding citizenship and received a certificate of appreciation in recognition of her contribution to the ongoing fight against hatred and intolerance in America and her name was added to the Wall of Tolerance in Montgomery, Alabama, to provide inspiration to all those who choose to take a stand against hatred. Sandy developed a love for the Lord at an early age and loved to sing spiritual songs. She became an active member of First Christian Community Baptist Church in January of 1996. Sandy’s caring nature led her to become a full-time caregiver to her niece for 15 years. She really loved taking care of people. Anyone who needed a place to stay or a hot meal or clothing, knew they could reach out to Sandy. Sandy leaves to mourn: her loving and devoted children, Zelline A.J. Gray- Basden, Selina Jenkins, Lesley Jenkins-Giles; goddaughter, Yvonne Savage; brother, Samuel Dublin and sister-in-law, Sandra Dublin; six grandchildren, Muntasir Umoja, Sr., Yero Umoja, Brandy Savage, Ciera Giles, Kenday Basden, Gregory Giles; ten great-grandchildren; nephew, Brian Goodloe; Greg Giles, a host of nieces, nephews, great-nieces and great-nephews; many more relatives and many friends.

The family of Sandy Jenkins created this Life Tributes page to make it easy to share your memories.

Send flowers to the Jenkins family.