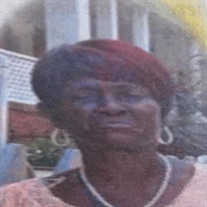 SANDRA DEE GREENE was born on August 19, 1960 in Baltimore, Maryland to Phyllis Travis and the late William “Bootsie” Greene, She departed this life Monday, May 24, 2021 after a courageous battle with a brief illness. Sandy spent her early childhood living in Cherry Hill with her Aunt Louise, Uncle Reginald and their children. Sandy became one of their children and Aunt Louise became Mama to her. And she became Mama to all her other nieces and nephews, young and old. Growing up Sandy loved Aunt Claudie's Holiday dinners and cookouts and Aunt Margie's fish fry Friday's. Sandy received her education from the Baltimore City Public School system. She attended Barclay Elementary School, Booker T. Washington Jr. High and graduated from Eastern High School before it became coed. She enrolled into Baltimore City Community College but stopped after 1 year to be a stay -at- home Mother and aunt to watch her niece “LaKeia” and let her sister Linda go back to high school. Sandy had several careers in her lifetime. She was a cashier at T-Bones Clothing Store in Baltimore, work at a geriatrics nursing facility in Philly and worked at a hotel in Philly but later transferred to the hotels downtown Baltimore location. She lived in Philly for about 11 years after successfully completing a treatment program. Sandy was a fun loving person and loved being around her family and friends. She knew a lot of people and had a lot of friends. She also enjoyed helping to raise her grandchildren, especially her grandson Kyree, she was his second mother. She leaves to cherish her precious memory:her mother, Phyllis Travis, two sister, Linda Dowery (Michael) and Tanya Travis who preceded her in death, a special cousin Tasha Parker who was raised as a sister, four children, Ebony Cherry, Sierra Johnson, Shamia Johnson and one son Ronnie Johnson Jr., five

SANDRA DEE GREENE was born on August 19, 1960 in Baltimore, Maryland to Phyllis Travis and the late William &#8220;Bootsie&#8221; Greene, She departed this life Monday, May 24, 2021 after a courageous battle with a brief illness. Sandy spent... View Obituary & Service Information

The family of Sandra Greene created this Life Tributes page to make it easy to share your memories.

Send flowers to the Greene family.