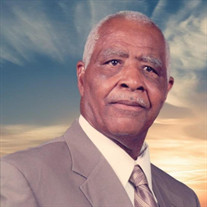 SAMUEL WILLIS, son of the late William and Larnell Willis, was born on February 3, 1930, in Suffolk, Virginia. On February 22, 2022, God in His infinite wisdom sent an angel for Samuel saying, “You fought a good fight, you finished the course, you kept the faith” II Timothy 4:7. He received his education in the Suffolk Public Schools. Samuel loved to work with his hands and could repair anything. Samuel relocated to Baltimore at the age of nineteen. He worked various jobs before settling on a career in construction. He worked for the Crest Construction Company for over 27 years before retiring in 1992. He was joined in matrimony to Ella Mae Smith on September 4, 1950. As a result of their union, they were blessed with four children Yvonne, Linda, Vincent, and Reginald. Samuel was a devoted loving husband and father. He loved his wife Ella Mae, who preceded him in death. He was a strong family-oriented person who loved his children, grandchildren, great grandchildren, and three great-great grandchildren unconditionally. He taught them to work hard and to never give up. One of his sayings was, “your word is your bond.” He taught them to honor their word. Samuel loved God and his family. He received Jesus Christ at an early age in Suffolk, Virginia. He attended Davis Memorial Baptist Church until 1967. The entire family joined the Mount Pleasant Baptist Church in 1967. He was a faithful member helping with facilities, serving as an usher and a member of the Silver Saints. He loved greeting members and visitors at the main entry door. He was well known by many. In 2002, he joined Walking Faith Family Ministries in support of his son, Pastor Reginald Willis. He remained a faithful and committed member of Walking Faith until God called him home. Samuel enjoyed family gatherings and watching old western movies on television. He also enjoyed sharing Black History with his grandchildren and great grandchildren. They never got tired of listening to granddaddy tell his stories. He will be missed by all. He leaves to cherish his memory: one daughter, Yvonne Terry-Lewis (daughter Linda Burrell preceded him in death); two sons, Vincent Willis Sr. and Reginald Willis; one son-in-law, Rudolph Lewis (son-inlaw, Larry A. Terry preceded him in death); daughter-in-law, Asandra Willis, affectionately called “First Lady; sister-in-law, Della Threat; seven grandchildren, Antoinette (Toni), Antoine, Vincent Jr., Kiwana, Nekia, Tameka, and Domineik (grandsons Michael and Devon preceded him in death); twenty great-grandchildren (great-grandson Dejuan preceded him in death); three great-great-grandchildren; two special nieces Bridgette and Tonia of Suffolk, Virginia; and a host of cousins, nieces, nephews, other relatives and friends.

SAMUEL WILLIS, son of the late William and Larnell Willis, was born on February 3, 1930, in Suffolk, Virginia. On February 22, 2022, God in His infinite wisdom sent an angel for Samuel saying, &#8220;You fought a good fight, you finished the... View Obituary & Service Information

The family of Samuel Willis created this Life Tributes page to make it easy to share your memories.

SAMUEL WILLIS, son of the late William and Larnell Willis, was...

Send flowers to the Willis family.