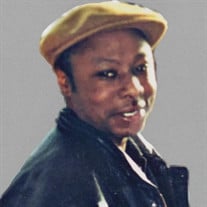 SAMUEL VICK passed unexpectedly on April 24, 2021 at the age of 62, at his home in Baltimore where he was the primary care giver for his mother. SAMUEL VICK was born on December 22, 1958 to James Vick, who preceded him in death, and Pauline Johnson Vick in Baltimore, Maryland. He was the youngest of five children. Samuel Attended and graduated from Northwestern High School after which, he joined the United States Air Force. He served as a Law Enforcement Specialist and received a Good Conduct Medal; a Longevity Service Ribbon; and an Overseas Ribbon. After his tour of duty in the Air Force, he received an Honorable Discharge after which he returned to Baltimore and worked at the Baltimore City Fire Department as a paramedic. SAMUEL had one daughter, Destini, whom he loved dearly. SAMUEL, affectionately known as "Sam", enjoyed playing chess, cards, and listening to his music. In addition, he enjoyed fishing and football - the Baltimore Ravens was his favorite team. He was loved by all and had many wonderful friendships throughout his life. He had unique and special relationships with each of his nieces and nephews. While in the military, he had a particular fondness for his time spent in Japan - gifting family with many gifts from his travels. He loved to cook and create restaurant style dishes for all to enjoy; and always made sure that no one was hungry when he was around. He will be deeply missed by hiss family, friends and all who knew him. SAMUEL VICK leaves to cherish his memory: his daughter, Destini Vaughn Vick (Frances Vaughn); mother, Pauline Johnson Vick; brother, Melvin Vick; sister, Florine Vick Robinson (William); brother, Patrick Vick (Emma); niece, Trina Patrice Robinson; niece, Karen McAlister, niece, Ebony Vick Ellis; nephew, Patrick Vick, Jr.; great nieces, great nephews, cousins, special friend and neighbor, Edna Dixon; and a host of other family members and close friends.

SAMUEL VICK passed unexpectedly on April 24, 2021 at the age of 62, at his home in Baltimore where he was the primary care giver for his mother. SAMUEL VICK was born on December 22, 1958 to James Vick, who preceded him in death, and Pauline... View Obituary & Service Information

The family of Samuel Vick created this Life Tributes page to make it easy to share your memories.

Send flowers to the Vick family.