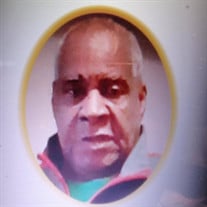 SAMUEL MEREDITH was born to the late Sonk and Mary Meredith on December 31, 1942 in Baltimore, MD. Samuel known as Sammy, Sam, Daddy and Pop Pop, was the fourth of fifteen siblings, departed this life peacefully on Friday, April 30, 2021. Sammy received his education through the Baltimore Public School System. He learned from his father, Sonk, if he wanted a better life, he had to be willing to work hard for it. Sammy went on to work in the ice cream business in the 1960’s. He was a hard worker who enjoyed his job, achieving recogintion for perfect attendance many times. Over the course of 45 years in his career at Nestle, he rose through the ranks from Machine Operator to Line Lead. After retiring in 2005, he continued his passion for making ice cream in his kitchen, delighting his friends and family with treats. Sam loved people, he was a caring man and believed in family unity. He was by no means a comedian, but he had plenty of jokes and his friends knew them well. Sam wasn’t a man to bite his tongue, he let you know how he felt in all situations. He also enjoyed a good cook-out, playing pool, fishing, and hanging out with his friends down at the garage. Most of all, Sam loved being with his grandchildren. Sam was married to his devoted wife Barbara Hansboro for over 50 years. The union produced two loving daughters Linnea Mickle and Lacey Bias. He had one son that preceded him in death, Wayne Meredith, from a previous marriage. Sam leaves to cherish: his wife, Barbara Hansboro; two daughters, Linnea Mickle and Lacey Bias; two sons-in-law, Edward Mickle and Stacy Bias; one granddaughter, Ka’Ren; four grandsons, Wayne Jr., Shannon, Bryce and Edward Jr.; four brothers, Lawrence Meredith, Andrew Meredith (wife Earline), Melvin Meredith (wife Martha) and Clarence Meredith; three sisters, Diane Meredith, Elaine Baxter (husband Theodore) and Deiris Meredith. Samuel was preceded in death by his father and mother, Sonk and Mary Meredith; one son, Wayne Meredith; five brothers Richard, Eddie, Micheal, Robert, Arndrey; two sisters, Francine Cooke and Elizabeth Stoke. He also leaves to mourn a host of in-laws, cousins, nephews, nieces, other relatives and friends.

SAMUEL MEREDITH was born to the late Sonk and Mary Meredith on December 31, 1942 in Baltimore, MD. Samuel known as Sammy, Sam, Daddy and Pop Pop, was the fourth of fifteen siblings, departed this life peacefully on Friday, April 30, 2021. Sammy... View Obituary & Service Information

The family of Samuel Meredith created this Life Tributes page to make it easy to share your memories.

SAMUEL MEREDITH was born to the late Sonk and Mary Meredith
on...

Send flowers to the Meredith family.