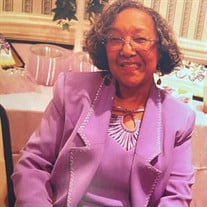 A TIME TO BE BORN, LEARN, AND WORK: Sallie LaSarah Ghee, daughter of the late Edna (Rainey) & Crawley Ghee, was born on April 4, 1941, in Blackstone, Virginia. She grew up in Kenbridge, Virginia and was baptized at New Grove Baptist Church. After returning to Baltimore, Sallie joined Berea Temple Seventh Day Adventist Church and attended Dumbar High School. She worked as a waitress at the Suburban Country Club and later worked for Baltimore City Public Schools for over 41 years, first with the Department of Transportation as a school bus aside, whos crew put the "T" in transportation, and later as a paraeducator at various schools. A TIME TO LIVE, LOVE, AND GUIDE: Sallie met William (Butch) Roland Langley and they were married in June of 1962 and lived in the Cherry Hill community for over 40 years. Out of his union she had six children. Sallie loved to dance, drive the highways, cook, listen to music, spend time chatting frequently with family and friends. She often gave advice on everything, mainly medical solutions. She loved showcasing her collection of beautiful hats and clothes at church and family events. Sallie enjoyed attending family functions, supporting all of her children, grandchildren, great grandchildren, nieces, nephews, as well as the Cherry Hill Reunions. A TIME TO SERVE AND CARE: Sallie was a building representative for the Baltimore Teacher's Union and a chaperone for the special Olympics. As a paraeducator, she provided one-to-one support to students. Sallie was acknowledged many times for her exemplary work and nominated School Bus Aide of the Year; highlighted for her attendance to the QUEST conferences and was presented the paraprofessional 30-Year Award by the Baltimore Teachers Union. To further her spiritual growth, Sallie joined the First Baptist Church of Cherry Hill where she was a faithful member and part of the Women's Ministry. Sallie was also a member of the Omaus Club which sponsored trips and cabarets. A TIME TO PASS ON CHERISHED MEMORIES: Sallie departed this earthy world to return to her place with GOD on January 16, 2022. Preceding her in death: her ex- husband Williams Langley, Sr., son, Victor Langley, two grandsons, Leslie Drummond, Jr. and Ronald Langley, Jr. and siblings- Grace, Berkley, Stanley, Ellis, James, Louise, Harold, and Earl. She leaves many to cherish her memory, children: Karen, William, Sharon, Ronald, and Royal; grandchildren: William III, LaShauna, Gabrielle, Tierney, Mykki, Tah'Naesha, Candace, Rashon, Adrian, Caprice, Quuadir and Kim; a host of great- grandchildren, nieces, nephews and friends.

A TIME TO BE BORN, LEARN, AND WORK: Sallie LaSarah Ghee, daughter of the late Edna (Rainey) & Crawley Ghee, was born on April 4, 1941, in Blackstone, Virginia. She grew up in Kenbridge, Virginia and was baptized at New Grove Baptist Church.... View Obituary & Service Information

The family of Sallie La-Sarah Ghee created this Life Tributes page to make it easy to share your memories.

A TIME TO BE BORN, LEARN, AND WORK:
Sallie LaSarah Ghee, daughter...

Send flowers to the Ghee family.