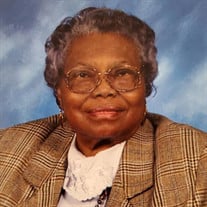 SADIE JOHNSON WILLIAMS, daughter of the late George Johnson and Julia Jones, was born July 7, 1924, in Sumpter County, Alabama. She attended school in Sumpter County and Demopolis, Alabama. At the age of thirteen, she accepted Christ as her Lord and Savior and joined the Mt. Carmel Baptist Church under the pastorage of Rev. Richard Ross. Sadie was joined in matrimony to Richard Williams on April 26, 1956, and shortly after moved to Baltimore, Maryland. She was employed at the Johns Hopkins Hospital for thirty-one years as a cook in the Nutrition department. She and the other cooks prepared such delicious food that people would come from surrounding churches to eat dinner in the cafeteria on Sunday. She was awarded the Baker King Award for service at Hopkins. Sadie also was a delegate and battled fiercely to organize the First Union at Johns Hopkins in 1969 known as 1199. 1199 is still a thriving Hospital Union to this day! Sadie joined First Baptist Church in 1956 when Rev. Gus Roman was pastor and served in many ministries. She served as Treasurer of the Nettie William Guild Society, Sunday School Teacher Class #5, a member of the Sanctuary Choir, and of course a cook in the Soup Kitchen. She served faithfully until her health failed, and even then, you could see her in her motorized wheelchair on Caroline Street going to church. She leaves to cherish her memory: nieces, Carrie Davis and Ernestine McCallum; great-nephews, Ramie (Tara) Mays, Eric (Shadina) Abdullah, Clinton Cook, Terrell Davis and Dwight Jefferson; great-nieces, Carol Mays, Joyce Mays, Sherry West, Mary Murdock, Michele Murdock and Carra Davis; also, nieces and nephews, Sherry McLeroy, Samuel and Byron (Lyn) of Warren, Ohio. Julia Wilson, Lithonia Gorgia, IZ Wilson of Allenwood, Georgia and a host of great-great-nieces and -nephews. Sadie also leaves to cherish her memory special long-time friends, Mrs. Lelia Harrison, Mrs. Ella Howell, Ms. Inez Prettyman, Mrs. Bernetta B. Wainwright, Deacon and Mrs. Oscar Robinson.

SADIE JOHNSON WILLIAMS, daughter of the late George Johnson and Julia Jones, was born July 7, 1924, in Sumpter County, Alabama. She attended school in Sumpter County and Demopolis, Alabama. At the age of thirteen, she accepted Christ as her... View Obituary & Service Information

The family of Sadie Mary Alice Williams created this Life Tributes page to make it easy to share your memories.

SADIE JOHNSON WILLIAMS, daughter of the late George Johnson and...