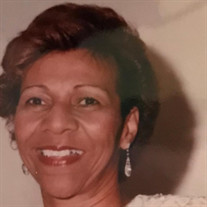 Ruth Yolanda Staton, the second of six siblings was born July 10, 1938 to Henry and /Ethel Blackburn in Baltimore, Maryland. She peacefully transitioned to her eternal home on Friday, October 29, 2021. Ruth was educated in the Baltimore City Public Schools and was a graduate of Paul Laurence Dunbar Senior High School. Shortly after high school Ruth worked at the Johns Hopkins Hospital. She desired a change in employment and accepted a position with the Social Security Administration in Woodlawn, Maryland. Ruth worked as an Account Investigation Clerk for thirty years where she met many lifelong friends. She met the love of her life, William G. Staton Jr. at 17 years old in Baltimore, Maryland and they married on February 27, 1960. This loving union lasted more than 61 years and was blessed with two daughters, Shelia and Angela. Ruth was an amazing wife and mother. Her family was her her pride and joy. She immensely enjoyed her hobby of traveling around the world. Ruth was a faithful member of the First Apostolic Faith Church of Jesus Christ, International. She began her walk with God as a young lady when her mother would bring "her girls" to church under the pastoral leadership of Bishop Winfield A. Showell. She continued her membership under the leadership of the present pastor. Apostle Cornelius Showell. Ruth was a faithful member of Sunday School and regularly attended Wednesday evening Bible Class with her husband. She was a beautiful spirit and was loved by all who met her. She was also a very giving and charitable person. Ruth leaves to cherish her memory and to celebrate her victorious life her husband, William G. Staton, two daughters, Shelia R. Staton and Angela D. Staton, three grandchildren: Gerard S. Rogers, Ciara C. Crowder and Danielle K. Crowder, two great-grandchildren Summer R. Rogers and Donald A. Taylor Jr., one son-in-law Larry Crowder, five sisters-in-law: Patricia Blackburn, Martha Powell, Minister Mary Morgan, Cora Staton and Ernestine (Fleming Bud) Peterson, three brothers-in-law, Dr. Septimus KaiKai, Eddie Staton, Alfred (Elizabeth) Staton, She also leaves to cherish her memory a host of nieces, nephews, cousins and other relatives and friends. Ruth was preceded in death by her parents Ethel and Henry Blackburn, her siblings William Blackburn, Joyce L. Carter, Dr. Regina E. KaiKai, Martha Stanley and John Blackburn.

Ruth Yolanda Staton, the second of six siblings was born July 10, 1938 to Henry and /Ethel Blackburn in Baltimore, Maryland. She peacefully transitioned to her eternal home on Friday, October 29, 2021. Ruth was educated in the Baltimore City... View Obituary & Service Information

The family of Ruth Yolanda Staton created this Life Tributes page to make it easy to share your memories.

Send flowers to the Staton family.