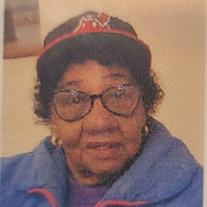 RUTH’S LIFE AND LEGACY Ruth Raye Harris lovingly known as “Momma” made her entrance into earthly realms on December 29, 1919. With heavy hearts. And immense sadness. We grieve the loss of beloved. Ruth departed this life peacefully in her sleep at home on March 1, 2022, at the age of 102. She was the daughter of the late Ezell Raye and Jophellia Thigpen. Wife to the late Joseph Harris, and the mother of nine (9) children in which seven (7) preceded her in death. On November 27, 1936. In Selma Dallas, Alabama. She married the late Joseph Harris and out of this union, her first-born son William James Harris was born. Approximately Two and half years later, she was blessed with her first- born daughter (Barbara Burns). In 1945 Ruth often had to travel back and forth from Kentucky and Alabama to Baltimore to comfort her daughter at Johns Hopkins Hospital. She rented a room near Johns Hopkins Hospital so she could attend to her 6 year old daughter who preceded her in death at an early age. After the passing of her daughter, Ruth decided to make Baltimore her home. In 1949, she companioned with the late Walter Preston Hill, Sr. and out of this union there were (7) children. Lillie Mae, Patricia Ann, Walter Preston, Ivory Jean, Ruth, Aleatha, Ezell Raye, and Terry Edward Hill. Ruth’s place of employment in which she retired was Francis Scott Key Medical Center as a Nutritionists Server. She enjoyed cooking and always prepared the family gatherings during holidays. She was a member and serviced her duties at Faith Baptist Church for over 50 years. She provided an abundance of Joy to all she knew. Ruth often spoke volumes at the right time. Her kindness and giving heart stood out to all that had the privilege of knowing her. She was always surrounded by loved ones who will honor her and embody the best of her legacy in the lives. A lover of game shows (especially the Price is right, and Family Feud) music Al Green (Love and Happiness), Cereal (Cheerios), Sport (Orioles), and Drink (J&B). she had a special love for her horse (Carrie) and Dog (Pierre). In 1976 Ruth purchased a home for family. During this time, she welcomed the love of her life the late Glover Macklin (Little Bit). You would often catch them leaving out to travel. Although Ruth’s life ended before we were ready, the time that she spent in our lives was memorable. Ruth leaves to mourn: her eldest son Reverend Willie James Harris, youngest daughter Ruth Althea Hill, Daughter’s Naomi Harris and Rosetta Hill. 1st cousin Juanita. Peggy, Mary Ann, Ronnie, Jimmy, and Joe Thigpen, thirteen (13) grandchildren Latonya, Johnny (Marty). Tyrone, Tammy, Freddie, Monterey, Joseph, Avron (Joe). Chantaye. Dayneia, Nikina, Denita and Amber. A host of great grand, great great-grandchildren, special little angel “DeReon” and friends.

RUTH&#8217;S LIFE AND LEGACY Ruth Raye Harris lovingly known as &#8220;Momma&#8221; made her entrance into earthly realms on December 29, 1919. With heavy hearts. And immense sadness. We grieve the loss of beloved. Ruth departed this life... View Obituary & Service Information

The family of Ruth R. Harris created this Life Tributes page to make it easy to share your memories.