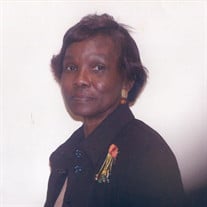 The Obituary Ruth Marie Andrews Ruth Marie Andrews, a devout servant of God, quietly and peacefully departed this life on August 5, 2021. She was born April 20, 1938, to the late William Edward Andrews and Myra Sue Andrews in Mecklenburg County, Virginia. Due to the demise of her biological mother shortly after giving birth, Ruth was fondly and lovingly reared by the late Cynthia Robinson and Charlie Stone. She was the youngest of, and predeceased by her siblings, Naomi Wilson, Thelma Hutcheson, Gertrude Stone, Gladys Stuckey, Joseph Andrews, Albert Andrews, Charlie Stone, Aubrey Stone, Richard Stone, and Allen Stone. Ruth received her education in Mecklenburg County Public Schools and graduated from East End High School in 1955. She accepted Christ as her Lord and Savior at an early age and was baptized at North View Baptist Church in South Hill, Virginia. On October 14, 1955, Ruth was united in holy matrimony to the love of her life, the late Deacon Willie M. Andrews, and to this union were born a son, Earl, and daughter, Deborah. Ruth and Willie were happily married for 65 years. Driven by her lifelong commitment to serve God, after moving to Richmond in 1955, Ruth joined and became an active member of Sharon Baptist Church. In 1978, she joined Rising Mount Zion Baptist Church. She was faithful in her service to the Deaconess Ministry where she served three terms as president, Hospitality Ministry and CARITAS, Kavansa Smith Ushers Ministry, and Pastor’s Aide Ministry. She also served as a Church School teacher, New Members Class teacher, Director of Church Activities, Church Clerk, and Contributing Editor for the Rising Mount Zion VOICE Newsletter. In 1997, Ruth was honored as Rising Mount Zion’s “Woman of the Year.” Ruth nourished her spirituality through faithful prayer, bible study and unwavering service to God. Her trademark comment was “Help Us Lord” and her favorite scripture is found in Romans 10:9, “That if you confess with your mouth, ‘Jesus is Lord,’ and believe in your heart that God raised him from the dead, you will be saved.” Ruth was employed by Richmond Public Schools for twenty-five years. She retired in 1998 as a Student Information System (SIS) operator. As a result of her decades-long advocacy for her Churchill neighborhood, Ruth received numerous commendations for her community service and leadership including Andrews Row, a residential subdivision named for Ruth and her late husband Willie, in recognition of their business venture promoting the development of better Richmond neighborhoods. She participated in the East End Beautification Project and served on the Roland D. “Duke” Ealey Memorial Fund Committee. She received citations of merit from John F. Kennedy High School in recognition of her commitment to excellence in education. Ruth was an active member of the Unity Civic League and volunteer with Hospice of Central Virginia. She was a founding member of Sisters United of Richmond, Virginia. Ruth leaves to cherish and honor her memory a son, Earl M. Andrews, Baltimore, Maryland; daughter, Deborah S. Andrews, Richmond, Virginia; one sister-in-law, Wilma P. Andrews, Richmond, Virginia; one brother-in-law, Joe J. Lambert, South Hill, Virginia; one aunt, Susie A. Loperl, Kenbridge, Virginia; and a host of admiring nieces, nephews, other relatives, and dear devoted friends.

The family of Deaconess Ruth Marie Andrews created this Life Tributes page to make it easy to share your memories.

Send flowers to the Andrews family.