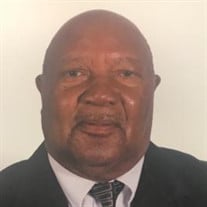 Ruben D. Bentley departed this life on August 13, 2021 at the age of 79. He was born in Hanover County on August 28, 1941 to the late Deacon Willie and Rosa Belle Bentley. He was educated in Hanover Public Schools. Ruben Bentley was a member of Jerusalem Baptist Church. He received Jesus at an early age and worked effortless in various ministries; such as a Trustee, Usher and Parking Attendant, Choir member, Hospitality and just about anything he could do to make people comfortable. He was devoted to chatting on the telephone with family and friends. when Joe couldn't make a service. He attended church service until health begin to fail. He truly loved his pastor and church family. Ruben was employed at Richfood for many years. Later he became Entrepreneur of Bentley's Disposal Service and Bentley's Hauling. He loved when it was broadcasted that it was going to snow! He worked vigorously shoveling snow on interstate highways. He loved taking vacations abroad and spending time at Indian Acres with his wife and grandchildren. He leaves to cherish his memory a loving and devoted wife, Diane Bentley, two sons, Ruben Darnell Bentley, (Pam) Tony Chandler and one daughter, Lizzie Thomas (Ronald), a stepson Tyrone Benjamin. His grandchildren, Marcus, Mario, Marquise, Micah, Myah, RaShaad, RaShonda RaShara, Toniqueka and Tonasia. His memory will also be shared by sixteen great grandchildren. God daughters; Mykel Pollard and Tamara Joyner Basic. He also leaves to cherish his memory two sisters; Barbara Powell (James) and Jeroline Harris, one brother-in-law; Henry Nicholas and one uncle, Wilford Robinson. He was preceded in death by two sisters: Gladys Mccowan and Eva Nicholas. Ruben also leaves to cherish his memory a host of nieces nephews, cousins; a devoted cousin, Russell Johnson and other loving relatives and friends among them a devoted Deacon Leon Jones. ; The family is grateful to Almighty God, for a life well lived, a journey which has only begun; and for the work assigned to his hands which is now complete.

Ruben D. Bentley departed this life on August 13, 2021 at the age of 79. He was born in Hanover County on August 28, 1941 to the late Deacon Willie and Rosa Belle Bentley. He was educated in Hanover Public Schools. Ruben Bentley was a member... View Obituary & Service Information

The family of Ruben Daniel Bentley created this Life Tributes page to make it easy to share your memories.

Send flowers to the Bentley family.