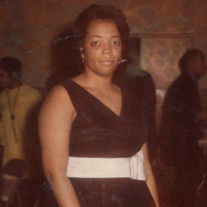 Rosetta Queen Code, affectionately known as Rosie, was born January 2, 1944 to the late Serena Queen Robinson and Charles Stinney in Baltimore, Maryland. She received her early education in Baltimore City Schools; and later received her GED. She held several job positions; her highest accomplishment being her positions at SSA where she received many awards. In 2012, Rosetta decided to retire form SSA. Before her illness, Rosetta gave her life to the lord and became a member United Baptist Church. After dating for many years, Rosetta married the love of her life, Robert Code in 1977. Within this union, their son Donte was born. Although they divorced, Rosetta and Robert remained great friends until his death in September 2021. She was known for her dimples and layed-back disposition. She loved going on trips and to the casinos. Her main hobby was collecting dolls... And what collection she had! During her early illness, Rosetta loved dancing, jewelry, and reading. She leaves to mourn her daughters Victoria Queen Lawson, Charlene Queen (preceded in death), Mary Catherine Wilson, her son Donte Code and Evangelyn Code. She will also be missed by Thomas Queen (Betti) of California, William grey (Lillian), Pearl Slade (preceded in death), Roger Faulkner (Carlene), Antoine Cole (Kelly), and a host of Step-children and step-grandchildren. She also leaves her grandchildren; Nathaniel (Pookie) Wilson, Sydney Robinson, LaPria, Brandi, Donte Jr., Dexter, and Victor Code; her great-grandchildren; Da'tin, Davion, and David; and a host of other family and friends who will miss her dearly.

The family of Rosetta Queen Code created this Life Tributes page to make it easy to share your memories.

Send flowers to the Code family.