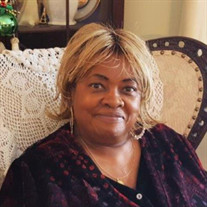 ROSALEE RICKS, daughter of the late Albert and Mabel Williams (Mabel Smith), was born on December 24, 1945, in Gastonia, North Carolina. Rosalee, a longtime resident of Baltimore, Maryland, went home to be with the Lord on Monday, April 13, 2021, ending a two month stay in Hospice care. Rosalee was the firstborn of two children born to her mother, Mabel. Rosalee, also called Rosie, spent her early childhood on her Grandfather’s (Papa) 100 plus acre farm. There Rosie played with her cousins and learned from her aunts and uncles the demanding ways of farm life. She talked about those early years and remembered occasions when Papa took his harvested bumper crops to town to sell at the markets. In 1952, Rosie left the farm life to join up with her mother and brother, who lived on Thomas Ave. in West Baltimore. Cousin Ozetter, also known as (Zet) and her three sons Larry, Curtis, and Stanley also resided at the same residence. The fun years spent living at Thomas Ave. were the beginning of lifelong relationships filled with memories and laughter. Rosie was, if you can imagine, often the focus of our laughter. As the young years of Rosie’s passed and the teen years of public schools ended, she headed north to New York City, the “Big Apple.” There she worked the restaurant circuit until she landed her first modeling job. While traveling back and forth, sometimes living in Massachusetts and Connecticut, Rosie quickly fine tuned her modeling talents and devote much time pursuing new modeling opportunities. After her brief modeling career ended, she eventually settled in New Jersey, where she met and married her late husband, James Ricks. At long last, in 1973, Rosie and her husband James returned to Baltimore, Maryland. Rosie worked in the health care industry for the State of Maryland until she retired. During the years that followed, Rosie began her Christian journey; she accepted the Lord and Savior Jesus Christ as her personal Savior. Her Christian life matured and evolved under the late Right Rev. M.Phillips, Pastor and Founder of the St. John Alpha & Omega Pentecostal Church Inc. Rosie’s zeal and determination to learn about the word of God soon led her to enroll in lengthy and ongoing bible study programs and bible college courses. Her high-spirited style of preaching, combined with her electrifying personality, introduced many souls to Christ. As a result of her bible resolve, in 1977, Rosie became Ordained Minister of the St. John Alpha & Omega Pentecostal Church Inc. In the following years, Rosie remained committed to preaching and teaching the word of God. Understandably, in 2009, she accepted the role of “Pastor Elect” of the Trinity Alpha & Omega Pentecostal Church Inc. Stanley J. Cruse, Pastor. As expected, in the ensuing months, Rosie continued her passion for fashion and style. As far as Rosie was concerned, clothes and the name Rosie” were one and the same. She enjoyed showing up at the church service, her brother’s house, or anywhere for that matter, dressed to impress, deck out in her delicate and elegant clothes. In the winter months, Rosie would show up groomed in her minks, other animal furs,and costly leather outfits. Whatever the season, be assured, Rosie would dress in the latest fashion, and she always commanded the room. To compliment Rosie, Mr. Henry Jones, her longtime friend, would dress in complementary styles and coordinated colors. Rosie and Mr. Henry, always particular and always smartly dressed. Family time with Rosie was always a special event. She loved taking her mother, Mabel, out to exclusive restaurants. She loved visiting and hanging out with her brother Wilson, sister-in-law Roberta, and nephew Torray, especially at their backyard cookouts. Rosie enjoyed being around her family. She often talked with her cousin “Zet,” her second mother,her uncle Isaiah and cousin Hazeline. Rosie spoke to all three during herlast days of life. Rosie loved and helped many people who crossed her path, including a host of foster children she raised and others she helped raise. She fed the hungry, clothed the naked, and housed the homeless. Rosie aided and supported many to adulthood. So, I say, rest in peace, my sister. You have done exceptionally well. You assisted many and asked for nothing in return. Your kind deeds demonstrated true Christian virtue. I will deeply miss you. You were undoubtedly an angel unaware who helped the disadvantaged whose pathway you crisscrossed. God Bless. Let not your heart be troubled: ye believe in God, believe also in me. In my Father’s house are many mansions: if it were not so, I would have told you. I go to prepare a place for you. And if I go and prepare a place for you, I will come again, and receive you unto myself; that where I am, there ye may be also. And whither I go ye know, and the way ye know. - John 14:1-4 Rosie leaves to cherish her memory: brother, Wilson Wallace; sister in law, Roberta Wallace; nephew, Torray Wallace; cousin, Ozetter Wilkins; uncle, Isiah Sadler; best friend, Henry Jones; a host of foster children; goddaughter Dr. Linda Gotham; siblings on the father’s side (sisters, Kim Bowers and Ruby Crank) and (brother, Travis Bowers); and a host of nieces, nephews, relatives, and friends

ROSALEE RICKS, daughter of the late Albert and Mabel Williams (Mabel Smith), was born on December 24, 1945, in Gastonia, North Carolina. Rosalee, a longtime resident of Baltimore, Maryland, went home to be with the Lord on Monday, April 13,... View Obituary & Service Information

The family of Rosa Lee Ricks created this Life Tributes page to make it easy to share your memories.

ROSALEE RICKS, daughter of the late Albert and Mabel Williams...

Send flowers to the Ricks family.