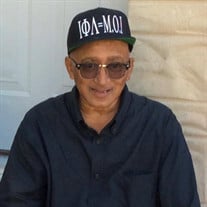 Ronald Eugene Smith, affectionately known as “Barrel”, “Peabody”, “The Professor”, “Smitty” by his family and friends. He was the son of James and Alean Smith, born on November 28, 1951 in Halifax, North Carolina. After a short illness, he slipped away while holding Kay’s hand. Ronald was reared in Christian home. He accepted Christ as his Lord and Savior at an early age at Unity Baptist Church (Located on 1003 E. 22nd Street), he also attended Ark Church Wednesday Noonday service sometime. He received his early education in the Baltimore City Public School System, where he received High School Diploma from Mergenthaler Vocational Technical High School in 1970 (Industrial Electronics). He continued his higher education at Hagerstown Junior College, Morgan State University and University of Baltimore. Ronald was a quite spirit, soft spoken, but well versed in many things like tailoring, computers, TV’s and used to be CD & DVD King. A little-known fact about Ronald is he was a Chess Master. Even while sick, on Sunday’s he would go to Mother Seton Gym and play others in chess, where he would beat and teach at the same time, he also played Chess online. Over the years Ronald worked for Social Security Administration, FILA & Johns Hopkins University where he retired two years age. But he never stopped working, he was a tax preparer which he started doing full time after his retirement. He finished some taxes the morning he passed. Ronald had a lovable, quiet, meek and mild person. He would debate you until the cows came home and he was right about 99% of the time. Ronald had a vivid memory; another little-known fact Ronald read the entire Bible. How many people can say they have read the Bible from Genesis? Ronald did! He never looked at his illness as a detriment because he still traveled with Kay back and forth to Rehoboth Beach, DE. He loved to travel; he was a faithful member of the men of lota Auxiliary (MOI) of lota Phil Lambda Sorority, Inc. –Kappa Chapter. He drove and traveled with the Sorority Sisters for over 30 years, he became their official van driver. Ronald also enjoyed providing assistance during the sorority's yearly programs at My Sister's Place and the Back to School Giveaway, he was an asset in setting up and breaking down the tables for the sisters. Ronald was also a loyal friend to his pals Eric Palmer, Rudy Hall, Twanday Kearney, Mustafa, Stanley, Felix Carr, Steve Thornton and Jerome "Rommie" Johnson; they checked on him daily. Ronald was preceded in death by his parents, James and Alean Smith, his younger sister and brother, Carolyn Smith and Gregory Smith. Ronald leaves to cherish his memory his loving two sons Derrick Smith and Ronnie Clark; brother, Andre Smith (Lavern); sister, Barbara Ayers, and his loving Wife in his Head and Heart, as well as caregiver; Sandra La-Kay Biles; aunt, Lat McNeill; his grandchildren: Shayshria, Kempa, DeAndre, Chinaza, Takina; great-grand children Bailyn, Bailee, Brielle, Adrianna, Adrian & Ace; nieces and nephews, Jerrod, Tangela, Chauntia, Brandi, Brandon, and a special niece Candice. Let's not forget his favorite little man, Isaiah Jenkins, aka "Doddie." Ronald could always count on Isaiah to check on him and bring him ice or something to drink. Lil Doddie would also steal his hard candy. Ronald was a loving a caring person who will be truly missed by all.

The family of Ronald Smith created this Life Tributes page to make it easy to share your memories.