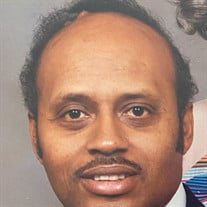 Roger Franklin Wickham, was born to Nathaniel John Wickham, Jr. and Camille Jackson Dabney Wickham on March 7, 1941, in Richmond, Virginia. He was the youngest of their three sons and is pre-deceased in death by his oldest brother Nathaniel John Wickham, III. Roger was a graduate of Maggie L. Walker High School. He honorably served his country when called upon during the peak years of the Vietnam War. During his tour of duty Roger earned several medals and badges highlighting his contributions while in action. After transitioning from the military service, Roger held several positions in the Richmond community, culminating in over 40 years of service with Hunter Holmes McGuire Veterans Administration Medical Center. His work ethic was second to none and he served as an exemplary role model to all who knew him. The essence of Uncle Pete’s (as he was fondly known to family) character was generosity to his family, friends, and co-workers. His co-workers became an extended family and he was often known to donate his accumulated time to colleagues when they were enduring a health crisis. Roger truly loved his job and the people he worked with, they were his extended family and thus he never retired. He was known for getting to work at 3 AM even though his shift started at 6 AM, demonstrating the epitome of dedication. As a man of few words, Roger could turn a bad situation into a positive one with one-word statements that captured the moment in an impactful and uplifting way. Long before binge-watching Netflix was popular, Roger was known for watching his westerns. For hours on end during the weekends, he loved to sit in his comfy chair uninterrupted and enjoy watching his favorite TV Land programs. If you caught him during one of those moments his answer to any question was even shorter. One of Roger’s favorite hobbies and past times was collecting antiques, knives, canes, hats, and coats. His appreciation for coats grew into the dozens. Roger had a gentle and kind spirit which extended to his love for animals. He had a deep affection for stray cats. He took them in as if they were his own. Always providing food and giving them the love and attention they deserved. He will be remembered for his kindness, generosity, independence, and positive outlook on life. Those he leaves to treasure his memory aspire to mirror the qualities he exhibited throughout his life. Loving memories will be cherished by his brother Landon Hunter Wickham, Sr.; seven nieces and nephews, Nathaniel John Wickham, IV (Yvonne), Andre’ Regauld Wickham (Daphne), Sonja J. Wickham, Landon Hunter Wickham, Jr. (Leslie), Byron Arthur Wickham (Starlita), Scott Roger Wickham (Alina) and Natalie Camille Wickham; seventeen grand nieces and nephews; thirteen great-grand nieces and nephews; beloved and devoted friends and colleagues, Linda Lewis, Janice Webb, Gina Middlebrook, Carol Oliver, Connie Landon, Carol Chen-Scarabelli, Thomas Carter, Harry Barnes and a host of family and friends.

Roger Franklin Wickham, was born to Nathaniel John Wickham, Jr. and Camille Jackson Dabney Wickham on March 7, 1941, in Richmond, Virginia. He was the youngest of their three sons and is pre-deceased in death by his oldest brother Nathaniel... View Obituary & Service Information

The family of Roger Franklin Wickham created this Life Tributes page to make it easy to share your memories.

Send flowers to the Wickham family.