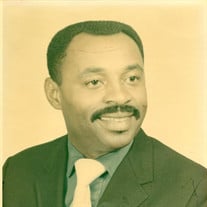 Legacy of Life Robert Edwin Walker, affectionately known as “Sonny Boy” entered into eternal rest on Tuesday, June 1, 2021. He was preceded in death by his wife, Anna E. Walker; three sisters, Ernestine Callis, Lula Day and Margaret Freeman. Robert was born to the late Clarence Nathaniel Walker and Fannie A. Walker of Mecklenburg County, Virginia. He attended James Solomon Russell High School in Lawrenceville, Virginia. Robert grew up on a farm in Meredithsville, Virginia in which he became accustomed to helping out. This etiquette became a staple point in his way of life in which each day he was given a deed or task at hand to conquer. These qualities also allowed him to retire from SunTrust Bank with 30 years of dedicated service. Robert was an outdoors man which may have encompassed grass cutting, car repairs, home touch ups and just sitting in the “shade” spot under the tree. During the fall of the year, it is well known that the “Cowboys” would be on his television screen. He could adequately be described as settled, independent, resourceful, and discreet. Robert became to know the Lord at an early age as a member of First Baptist Church, La Crosse, Virginia. Whether thru home Bible study, Vacation Bible School or weekly Sunday Service, he knew the Lord to be thy Savior. He leaves to cherish his memories two sons, Robert Oneal Walker and Brent Walker; granddaughter, Breona Walker; daughter-in-law, Rolanda Walker; sisters; Ann Guice of Birmingham, AL, Mary Warren of Alberta, VA, Betty Sullivan of Clinton, MD and Phyllis Walker of Richmond; brother, Clarence Walker, Jr. of Fredericksburg, VA; a host of nieces, nephews cousins and other relatives and friends. We bow in humble submission to our Heavenly Father who doeth all things well.

The family of Robert Walker created this Life Tributes page to make it easy to share your memories.