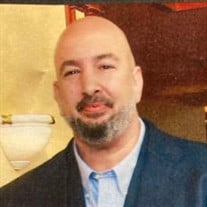 Robert Anthony Joseph Michel Jr. was born on September 21, 1966, in Derby, Connecticut at Griffin Hospital. He was the elder son of Janice and Robert Anthony Joseph Michel Sr. Robert received his education in Seymour, Connecticut where he attended high school and later obtained his GED. When Robert was 17 years old, he joined the US Army and served his country from 1983-1985. During his time in the service he lived in Germany. He later returned to states and moved to Baltimore, MD. Robert and Deanna (Chadeanna) met at Gordon Phillips Beauty School in 1997. Robert was Deanna's tutor. They welcomed their first son, Darius Anthony Joseph Michel in 1998 and later they welcome their last born son, Mariq Anthony Joseph Michel in 2004. Later, Robert and Deanna were married on June 15, 2012. The next very day, he moved his family from Baltimore, Maryland to McKees Rock, PA. Robert provided for his family during various jobs over the years as a high rise window washer and later as a truck driver. He loved to debate about politics and current events. He was very passionate about the things he believed and felt a great sense of pride regarding integrity and honor. He had a sense of humor and made his family laugh. He was good working with his hands and figured out ways to make things work. He improvised when necessary to make things work. He loved learning about the world and read in past time. If you ever went out with Robert or caught a cab with him you know, he was a good tipper. If he ever spent time with you kids, then you know about all the donuts. The kids, loved their "Uncle Robert." He enjoyed spending time with his wife and kids and working on renovating their home. He will be missed by all who knew him. Robert was preceded in death by his mother and father, Janice and Robert Sr. He leaves to cherish his memory a loving wife, Candeanna; sons, Darius and Mariq; brother, Eric; mother and father-in-law, Chandra and Andre; sisters-in-law, Shenika Dyson (Kelvin), Tanielle Allen, brother-in-law, Terrill Allen (Ethel), Michael Allen, five nieces and thirteen nephews, host of beloved relatives and friends.

The family of Robert A.J. Michel Jr. created this Life Tributes page to make it easy to share your memories.

Send flowers to the Michel family.