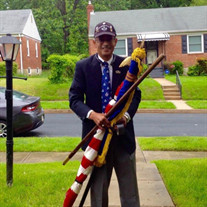 Robert Murphy Matthews, Sr. (known to all as Robin), 75, devoted husband, father and brother passed peacefully away on January 14, 2022, in Baltimore, Maryland. He was born November 1, 1946, in Baltimore, Maryland to the late Robert W. Matthews III and Vashti Murphy Matthews and is survived by his loving and faithful wife of 45 years Harriette Lane Matthews, his son, Robert Matthews, Jr (Jasmine) and daughter Jenesta Matthews (Natalie). Robert attended Forest Park Senior High School where he was on the Varsity Track and Football Teams. He was a 1970 graduate of Morgan State College in Baltimore where he earned a BS in Psychology and attended the MBA Program (Marketing) at Morgan State University School of Business. During his Morgan days, he became a member of Alpha Phi Omega fraternity, the Psi Chi Honorary Society and was on the Dean’s List. He completed the Morgan ROTC Program where he was commissioned a 2nd Lieutenant in the US Army Infantry. As a commissioned Officer, he completed Infantry Officers Training, earned the Expert Qualifications Badge, and attended the Basic Airborne Course earning the Parachute Badge before serving in the 2nd Battalion, 502nd Infantry Regiment, 101st Airborne Division at Ft. Campbell, Kentucky. Robert followed the Murphy tradition of learning the ropes of the newspaper business as a young child from his grandfather and Afro American Newspaper publisher, Dr. Carl J. Murphy and he worked at the Afro in many capacities over the years. Following his service in the United States Army, Robert began his work in sales and business in Illinois as a sales representative at Illinois Bell Telephone and continued to hold sales representative and account executive positions until he returned to Baltimore and started his own company KIS Systems Inc. His company was one of the new Minority Small Business contractors for the Baltimore City Board of Education and was recognized as a top Minority Business. Even as he took on sales positions with outside companies, he remained passionate about his Alma Mata, Morgan State University, the 2nd Battalion, 502nd Infantry Regiment, 101st Airborne, and football until his retirement in 2017. Even after retirement, he created newsletters, hosted a radio show, created a Facebook tribute page to the 555th Parachute Battalion, and freely consulted with anyone who wanted advice on helping their children succeed in life. Robert was the oldest of 5 and is preceded in death by his sister, Yvonne Carla Matthews. He is survived by brothers LTC (Ret) Rodger Murphy Matthews Sr. (Carol) and Carl Chester Matthews; sister Martha E. (Betty) Schuler; Stepmother, Kathleen Matthews; nieces Donne Elizabeth Lewis, Bobbie Evon Padgett (Brian), Rayna Matthews-Whetstone (Roderick) and nephew Rodger Murphy Matthews II (Kate) as well as many cousins and friends The Interment will follow at a later date. Please consider a donation to St. James Episcopal Church.

The family of Robert Murphy Matthews Sr created this Life Tributes page to make it easy to share your memories.

Send flowers to the Matthews family.