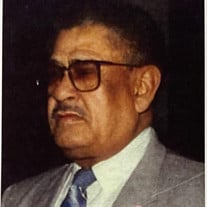 ROBERT JOHNSON, son of Webster Johnson and Mary Johnson both deceased, was born on October 22, 1926, in Hartsville, South Carolina. He received his education in the Hartsville, South Carolina Public School System. When Robert came to Maryland he got a job at in the steel mills at Bethlehem Steel and worked there for 40 years. Once he retired, he then got his barber license and opened up his own barber shop. Robert was well known allover, he wasn’t afraid of a challenge be it people or life, he stayed true to his character, his friends and his family. “To sum it all up,” to have met and known Robert was an honor and an experience of a lifetime. Robert accepted the Lord as his Savior. He was preceded in death by his son Robert Webster Johnson and brother Otto Johnson. To cherish his memories, he leaves: his beloved wife, Minnie L. Johnson; and precious children, Delayea L. Jordan (daughter) and Arthur W. Johnson (son); four sisters and one brother, Evelyn Wilson of Winston Salem, North Carolina, Katie Hines Jackson of White Plains, New York, Virginia Johnson of Bridgeport, Connecticut, Doris Johnson of Strickland, Connecticut and Wade Washington of Hartsville, South Carolina; grandson, Arthur T. Jordan of Gilbert, Arizona; and one great-grandson, Nathaniel A. Jordan of Gilbert, Arizona. There are many things in life we cannot understand, But we must trust Jehovah God’s judgement and be guided by His hand; And all who have God’s blessing can rest safely in His care, For He promises us safe passage on the wings of faith and prayer. Lovingly submitted, Your Loving Friends and Family

The family of Robert Johnson created this Life Tributes page to make it easy to share your memories.

ROBERT JOHNSON, son of Webster Johnson and Mary Johnson both...