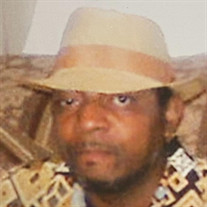 Obituary “…Whosoever believeth in Him should not perish, but have everlasting life.” John 3:16 On October 10, 1963 Robert Linwood Harvey, Jr. was born to the Louise Graham Harvey and Robert Linwood Harvey, Sr. in Richmond, Virginia. He was one of three siblings. Robert grew up in a loving and nurturing home. He accepted Jesus Christ as his Lord and Savior at a young age and was baptized at Mt. Carmel Baptist Church. He would often attend St. Paul’s Baptist Church resulting in a strong Christian foundation. Robert practiced the love of the Lord through his many kind deeds and acts of love that were extended to everyone he met. Robert received his education from the Richmond Public School System and graduated from Henrico High School in 1982. While attending, he played on the basketball team. He was blessed with two children, Tasha and Travell whom he loved dearly. They were an extension of his heartbeat. It saddened him that he would not be in the present for their continued accomplishments. However, he will be watching them from up above. In his leisure, he enjoyed watching all types of sports. He was a true Dallas Cowboys fan. You could not say anything bad about the blue and white team he loved. Robert was a very considerate and warm-hearted person who had a great impact on everyone he met. Robert had a heart of gold and a smile that would warm up any room. He was truly a kind and giving person that made everyone feel special and was loved by many. Robert was an outgoing people person that was everyone’s “big brother”. He was very stylist and always made sure that he was dapper when he stepped out. Robert will be remembered as a person that never took anything or anyone for grante and had an enoromous “hat/cap” collection. He lived his life to the fullest and his greatest love was serving the Lord. Robert peacefully transitioned to his Heavenly home on November 26, 2021 at Lucy Corr Assisted Living Facility in Chesterfield. He is preceded in death by his father Robert Linwood Harvey, Sr. Robert leaves to cherish his loving memories: daughter, Tasha Faulk; son, Travell R. Mashore; six grandchildren, Janiyah, Malik, Harmonii, London, LaFrank and Frankie; caring mother, Louise Graham Thomas and step-father Victor L. Thomas; two brothers, Ricardo Harvey and Ronnie Harvey; three nieces, London Harvey, Asia Harvey and Aliyah Harvey; a best friend that was like a brother to him, Keith Williams; and a host of other relatives and dear friends. Robert was a good man who was humble, always the same, genuine, authentic, generous and kind.

The family of Robert Linwood Harvey Jr. created this Life Tributes page to make it easy to share your memories.

Obituary
“…Whosoever believeth in Him should
not perish, but...

Send flowers to the Harvey family.