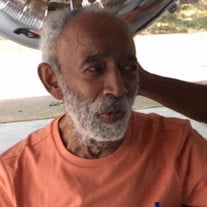 ROBERT LEON CARR was born on July 22, 1938 in Baltimore, Maryland to Marie Chalk and Robert Carr. He departed this life on November 11, 2021 at St. Elizabeth Rehabilitation and Nursing Center in Baltimore, MD after a prolonged battle with Alzheimer’s disease. Robert attended school in Baltimore, Maryland. He served as a Basic Airman in the United States Air Force from September, 1955 to January, 1957. After his military service, he moved to Queens, NY and worked for a moving company. He married while in New York, had two children, and later divorced. After retiring, he moved back to Baltimore to be close to family. One of Robert’s passions in life was music; especially Jazz, Rhythm and Blues, and Soul music. He had an extensive collection of vinyl LP’s and 45’s that he collected over his lifetime and filled his closet. Music was the Joy he loved to share with family and friends. Another passion was watching sports on TV. He, also, loved to dress stylishly and neatly. His extensive shoe collection occupied a large part of another closet. He was there for his family when needed. He quit school after the 8th grade to go to work to bring in money to help support his single mother and younger brother and sisters. He acted as caregiver with his siblings to care for his mother during her battle with cancer. In losing him, we have lost another piece of ourselves. He will be sorely missed. He leaves to remember him: his daughter Ava, his son Robert Jr., his sisters Shawan and Yvonne, his brother Barry, his nephews Jerome and Jamal, his niece Jaye, his grandnieces Miah and Aisha, his grandnephew Rico, his stepsisters Jean Carol and Nadine, his in-home health care providers Daisy and Serina and a host of other relatives and friends

ROBERT LEON CARR was born on July 22, 1938 in Baltimore, Maryland to Marie Chalk and Robert Carr. He departed this life on November 11, 2021 at St. Elizabeth Rehabilitation and Nursing Center in Baltimore, MD after a prolonged battle with Alzheimer&#8217;s... View Obituary & Service Information

The family of Robert Leon Carr created this Life Tributes page to make it easy to share your memories.

Send flowers to the Carr family.