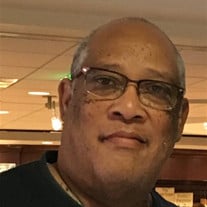 RICKEY TIMOTHY SMITH, SR was born on February 10, 1959 at Johns Hopkins Hospital in Baltimore, MD to the late Zenoble Jefferson and Richard Smith. He transitioned from this life on Sunday, May 1, 2022 at his home. He was an only son, growing up with four sisters. Rickey attended Baltimore City College High School in 1975 before later completing classes at the Community College of Baltimore. He brieﬂy spent some years in Connecticut before returning to his home city of Baltimore, where he met his wife of 28 years, Kay Smith. They married on June 25, 1993, and out of this union came his two sons, Christopher and Rickey Jr. Rickey was a dedicated laborer, always making sure to provide for his family. He held many jobs over the course of his life, ranging from security at Johns Hopkins Hospital, assisting law offices, to cooking seafood at Phillips. However, Rickey spent the majority of his career on the railroad working for Amtrak, where he held various jobs until his eventual retirement after over twenty years of service. Rickey was a self-taught historian, who loved researching and learning about world history. His favorite subjects centered around the history of Black Americans and ancient Africa. He was very knowledgeable about a rang of subjects, which led him to become someone that you could talk to for advice about anything - and also a great handyman. Rickey was the ultimate foodie - if you wanted to know the best food spots in any given area, he was the man to talk to. He was a huge boxing and football fan, which he loved watching with his two sons. After retirement, he enjoyed spending his free time relaxing in his recliner, alongside his dog, Cody. A huge animal lover, he took care of many different pets over his lifetime. Rickey also loved relaxing in nature, exploring his spirituality, and spending time with his family . Rickey’s memory will be cherished by his wife, Kay; his two sons, Christopher and Rickey Jr; his grandchildren, Channing and Yari; his four sisters, Laverne, Lavette, Vanessa and Kimberley; his nephew, Sola; great-nephew, Josef; and a host of family and friends

RICKEY TIMOTHY SMITH, SR was born on February 10, 1959 at Johns Hopkins Hospital in Baltimore, MD to the late Zenoble Jefferson and Richard Smith. He transitioned from this life on Sunday, May 1, 2022 at his home. He was an only son, growing... View Obituary & Service Information

The family of Rickey T. Smith, Sr. created this Life Tributes page to make it easy to share your memories.

Send flowers to the Smith, family.