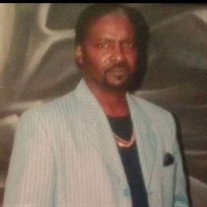 Legacy of Life Rickey Nathaniel King was born on April 18, 1958 to the late Viola White and Preston King of Williamsburg, Virginia. He spent his young years in Williamsburg and attended Lafayette High School in James City County, Virginia. He later furthered his education by receiving his CDL License. Rickey decided to move to Richmond, Virginia for work and make Richmond his home. He was formally a drywall finisher and lastly a truck driver. Rickey attended Goodwill Baptist Church. After retiring, he spent a lot of time with his brother Marvin affectionately known as his best friend. They both spent time fishing together and always trying to out do each other with who caught the most fish or the biggest fish. Fishing was Rickey’s greatest pastimes. His favorite team was the New England Patriots when Tom Brady was the quarterback. He and Marvin would often crack jokes about who would win and who had the most rings. They would work on cars together and if you ever had a question Rickey was the person to call. Rickey also had a love for music and liked to dress up. He was always in style and made sure that he kept his cars clean. Rickey was the glue of the family and no matter what time it was he was always there for you. Rickey loved his children, grandchildren, siblings and family. He was a chef and loved cooking for his family. Rickey enjoyed the family time they always had. He will truly be missed and his love will be instilled in us forever. He is preceded in death by his loving parents; four brothers and two one sisters, Calvin, Preston Jr. Alvin, Teresa and Sherie King. On Sunday, August 29, 2021 Rickey was called home for eternal rest. He leaves to cherish his daughter, Jae’monique Pollard; three sons, Rickey Cowles, Jermaine King and Preston Taylor; six adored grandchildren, Rickey Cowles Jr., A’Niyah Maurice Pollard, Ari’Yanna Fairly Pollard, Messiah King, Elijah King and Ilum King; five caring siblings, Marvin King, Larry King Lucille King, Adele King, and Jeannie Hill; his caregiver and friend, Cynthia Smith and her family; a long-time family friend, Janet Watkins; a host of family, other relatives and friends. We bow in humble submission to our Heavenly Father who doeth all things well.

The family of Rickey Nathaniel King created this Life Tributes page to make it easy to share your memories.