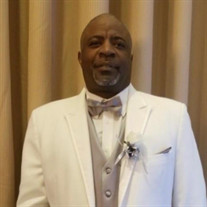 Life Reflections Richard Powell Jr. was born October 20, 1967 in Baltimore, Maryland to Richard Powell Sr and Barbara Kelly. He was affectionately known as “Ricky” or “Rick” . He was preceded in death by Kariim (Younger Brother), Mary Jackson (Maternal Grandmother) and Warren Kelly (Stepfather). As a young person Rick was Baptized at the Zion Baptist Church of Baltimore. He began his pursuit of education in the Baltimore City School system, matriculating as a 1985 graduate of Woodlawn High School, where he was a member of the Varsity Basketball Team from his freshman thru senior year. Rick loved playing basketball; he could always be found on a court mastering his skill. While attending Woodlawn High School, Rick formed many lifelong friendships which he would later call his brothers and sister: Vincent Burch, Chris Stokes, Felicia Whitehead, Brian Hitchcock, Thomas Chandler, Terry Jones and Anthony Delbridge . Rick loved driving and traveling. He combined these two passions in his career choice as an Interstate truck driver. He was most recently employed by It’s Delivered Logistics under the ownership of Jerry Holt and Ikechuku (EK) Chinwah of Chicago Illinois. He also drove for HD Supply, Authority Parts Service, and Seven Eleven. To know Rick was to love him, he leaves a lasting impression on everyone he meets whether family, friend or stranger. You were greeted with a smile and left holding your side from the laughter… that was Rick. How he loved his family especially the kids. He was their “Uncle Rick” the one they had the most fun with, the holiday gatherings, family reunions, cook outs being the grill master, playing cards with cousins and just lighting up the room with his charismatic personality and laughter. He loved all sports especially football, sometimes it was hard to determine who he was rooting for especially if his beloved Cowboys were on at the same time as the Ravens. The memory of his many loves, outgoing personality, and value of family will be forever cherished by : Barbara Kelly (Mother), Richard Powell Sr. (Father), Dawn Roberts (Fiancée), Dominick Burgess (Stepson), Dylan Burgess (Grandson) Amelia King (Stepdaughter), Hakim Hopkins (Fana)Brother) and Warren Kelly Jr ( Diamond)Brother), Qiana Montgomery and Renee Powell (Sisters), Loving Aunts & Uncles. Donna and Vernal Barnes, Willie and Lydia Jones, James and Phyllis Jones, William T Powell, Patricia Powell, Sharon Agar and Vondelette Powell, along with countless nieces, nephews, cousins, extended family and friends. Well done, thou good and faithful servant, May the work that you have done speak for you

The family of Richard Powell Jr. created this Life Tributes page to make it easy to share your memories.

Send flowers to the Powell family.