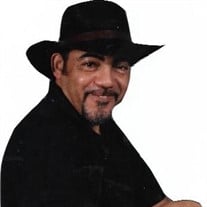 Obituary for Richard Leroy Jones, Sr. Richard Leroy Jones, Sr., also known as Lee, Leroy, Smokie and Boo was born on August 27, 1946 in Walkerton, Virginia ( King & Queen County). He departed this life on Wednesday, February 2, 2022 at St. Mary’s Hospital headed to a better life in Heaven free from all pain and suffering. Awaiting his arrival were those who preceded him in death, his mother, Helen, father, William, son, Richard Jr., sister, Willnetta and his brother, Harold. Richard leaves to cherish his memory his wife, Victoria (aka Vicki); daughter, Carolyse Andrews; his siblings, Clarence (aka Pick)(Olga); William (aka Skip); Carolyn and Jerry; grandson, Bryant Bonzali Jones; step-daughter, Dawn Allen (Davon); step-son Jason Reeves (Princess); step-granddaughter, Destinee Allen and step-grandsons, Jaekwon and Javell Reeves; step-great grandson, Kyrie Henderson-Reeves; nieces, nephews, cousins, friends, co-workers, sisters-in-law and two special “Old Ladies,” Virby Coe (mother-in-law) and Myrna Dorsey (cousin) from Georgia, Pennsylvania, Ohio, New Jersey, North Carolina and Virginia. Richard was raised in Walkerton, Virginia. At an early age, he joined New Mt. Zion Baptist Church in Walkerton. He never changed his membership and attended Bethlehem Baptist Church quite often with his wife and it was thought by many that he was indeed a member. Richard graduated from King & Queen County Central High School in 1966 and served in the United States Army from 1966-1968 followed by four years of reserve duty. A funny thing while in the service, Richard entered as a cook and when honorably discharged he was an executive chef! So begins his livelihood of COOKING. You may have seen him at the University of Richmond; the Richmond Country Club; Holiday Inn (Fanny’s); Days Inn Hotel; Holiday Inn-Ashland and the position he retired from after 10 years as the Executive Chef at Randolph Macon College where meals were served three times a day, seven days a week to 3,000 students. He later came out of retirement and started cooking again. This time he worked as a cook for an Adult Day Care Center, Seniors First Choice. A few years later, he left but continued to cook. With his wife, lunches and dinners were made available every Friday for everyone to enjoy. The favorites being bread pudding, fried fish, fried potatoes with onions and pulled BBQ. Retired or not, sick or not, say the word FISHING and he was ready to go. He was a fisherman, everyone knew it, and wanted to be a fisherman just like him. You’d know it was him if you saw a long fishing pole covering the width of the pier that was cast out in the ocean from Gloucester-Richmond. Then all of a sudden it appears he’s caught a fish, a big one too! He begins to lean back and forth, with his foot on the ledge making it appear to anyone watching that he’d caught Shamu, the Whale! Richard was an avid baseball player, always referring to himself as the pitcher. Even to his death, he tried to throw something, the latest was the bean bag in the corn hole game. Richard loved to play games with his friends and family. One group started off playing cards then they were introduced to playing Dominoes and from that day on, a train ride took place each Friday until the Pandemic. In the Spring of 2021, Richard became the Yard Sale King on Williamsburg Road. In the front yard you’d find him playing music, talking to his customers and discussing his wares for the ages of infants to adults. You’d never know what you may find. Richard was very quiet and observant. We have lost someone dear to us. He was a husband, father, grandfather, brother, uncle, cousin and a great friend. Richard, you are gone but not forgotten.

The family of Richard Leroy Jones Sr. created this Life Tributes page to make it easy to share your memories.