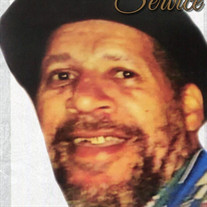 Richard John Harris, son of the late Albert Forrest Harris and Nancy Giles Harris, was born on November 20, 1949 in Baltimore, Maryland. He departed this life peacefully on February 19, 2021 after a gradual decline in health. Richard was known to his friends as "Daddy Rich". Richard was supported by his wife, three children and family during his last days in life. Richard received his education in Baltimore City Public Schools in Cherry Hill where he was known as Boo-Boo. Richard then moved on and became employed full-time at Delaney Towson Nursing Home in the Maintenance Department in the early seventies, where he met the love of his life Loretta Benjamin. They soon married on February 19, 1972. Out of this beautiful union, three children were born. After building a family, Richard started his career with Baltimore Gas & Electric Company. He then started his true love and passion as a Drywall Installer and painter. Richard (Daddy Rich) made friends wherever he went. He was known for his love for his wife, music, laughter, and his jokes. Richard will truly be missed by all who had the pleasure of knowing him. He could sell you the shirt on your own back, and the shoes you were wearing. He loved his wife Loretta so much. He loved his children and grandchildren who called him "Pop-Pop." Cherished memories of Richard will remain with Loretta Harris; his daughter, Andrea Harris-Bivens, two sons, Richard Devone Harris and Rodney Deon Harris, son-in-law, Shelton Bivins Jr.; daughter-in-law, Chiquita Parker; sisters, Barbara Jean Brunson and Lorraine Bryant; brothers, Albert F. Harris Jr., Clifton Thomas Harris and Cornelius Harris; eight grandchildren, Britaney Harris, Keshawn Harris, Justin Sharp, Iyana Harris, Shelton Trey Bivins III, Rodney Miguel Harris, Maziyah Laniera Harris and Makiyah Lanay Harris; sisters-in-law, nieces, nephews, and a host of other relatives and friends. May all those who loves and were loved by Richard find comfort in treasured memories.

Richard John Harris, son of the late Albert Forrest Harris and Nancy Giles Harris, was born on November 20, 1949 in Baltimore, Maryland. He departed this life peacefully on February 19, 2021 after a gradual decline in health. Richard was known... View Obituary & Service Information

The family of Richard John Harris created this Life Tributes page to make it easy to share your memories.