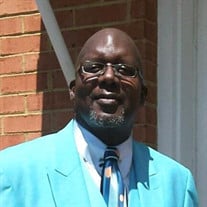 Ruben (Reuben) Darnell Bentley passed away peacefully at the age of 59 on Saturday morning, April 2, 2022, at Memorial Regional Hospital. He was born October 26, 1962, in Richmond, Virginia to the late Ruben D. Bentley and Florence Byrd. He was educated in Hanover County Public Schools. He was preceded in death by his brothers Michael and Forrest Bentley. Ruben accepted the Lord Jesus Christ as his personal Savior and joined Jerusalem Baptist Church. Years later he became a member at Mt. Calvary Church Intl. where he served on the Usher Board. He was friendly to everyone he met making them feel welcomed. Even though he was never in uniform, he was always fully dressed with a smile and ready to serve. He loved going to church where he would “Dress to Impress”. He also had a love for detailing cars, listening to quartet and old school music. Ruben was a diehard Dallas Cowboys fan and always looked forward to talking trash when they would beat the Washington Redskins. He was also a member of the “Dozen Cousin” Club. He is survived by his wife Pamela, whom he met at Bank of America one night as he fixed her car in the pouring rain, and only wanted her to pay him with her name. From there, they began their 36-year relationship and married on October 21, 1989. Reuben and Pam’s union manifested 3 beautiful children one son, RaShaad (Nina -girlfriend), and two beautiful daughters, RaShonda and RaShara Bentley. He had one grandson, Damien Bentley. Ruben is also survived by his mother Florence Byrd, his brother Marvin Carter (Angela), and sister Lizzie Thomas (Ron) whom he loved dearly. He also leaves to cherish his memory his father-in-law Alfred Christian, his stepmother Diane Bentley and step-brother Tyrone Benjamin, three aunts Atlee Randolph (Willie), Barbara Powell (James), and Jeroline Harris, two uncles Henry Nicholas and Wilford Robinson. Ruben leaves a host of loving sisters and brother in laws, nieces, nephews, cousins and other relatives and friends. Though Reuben is gone, he will never be forgotten. Rest well Husband, father, “Pop”, brother, uncle, cousin, and friend. We’ll see you again one day.

Ruben (Reuben) Darnell Bentley passed away peacefully at the age of 59 on Saturday morning, April 2, 2022, at Memorial Regional Hospital. He was born October 26, 1962, in Richmond, Virginia to the late Ruben D. Bentley and Florence Byrd. He... View Obituary & Service Information

The family of Reuben Darnell Bentley created this Life Tributes page to make it easy to share your memories.

Ruben (Reuben) Darnell Bentley passed away peacefully at the...

Send flowers to the Bentley family.