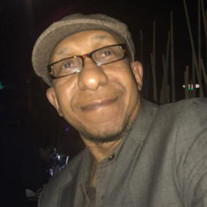 REGINALD ALBERT ROBINS (REGGIE) was born on March 25, 1966 in Baltimore, MD to Ms. Loretta Robins and Mr. Ray Adams. Reggie received his education in Baltimore City Schools and was a proud, spirited and boastful member of the Paul Laurence Dunbar Class of 1984 (Go Poets). An interest in the culinary arts and food service led him to receive formal training at the Baltimore Culinary School of Arts. Hospitality is defined as the friendly and generous reception and entertainment of guest, visitors or strangers. We can add Reggie’s name to this definition. Matthew 25 says “Then the King will say to those on his right, Come, you who are blessed by my Father; take your inheritance, the kingdom prepared for you since the creation of the world. For I was hungry and you gave me something to eat, I was thirsty and you gave me something to drink, I was a stranger and you invited me in, I needed clothes and you clothed me, I was sick and you looked after me, I was in prison and you came to visit me.” Reggie was the example of Christ’s love and in action. His Care and Compassion…………always for others; His Passion…..ensuring others needs were met; His Energy…..serving; His Fun…….smiling when he saw others were smiling. From Whittier Street (The Harvest House Crew) to Hanlon Park in “The County” was known as “the Mayor”. Reggie was an avid dancer, and a member of the Stepping Out Production Line and Hand Dance Troupe Baltimore Maryland. Taking the drive to care for others to the limit, Reggie was a Sales Management Consultant with PFP/The Family Security Plan for 18 years. He wanted to make sure that his clients were “covered and cared for”. He looked forward to the vacation trips with friends and colleagues. The consummate host even in leisure, there were so many instances, remembrances and pictures of Reggie serving and seeing to the needs of others. Last Friday, God moved. He saw that Reggie’s service on earth was complete. God let him know that there was nothing more for him to do. His life was now an example. He leaves to cherish his memory: his loving mother, Loretta Robins; cousins, Kay Alexander and Derrick Monroe; godson, Donte Johnson (Sharaa), grand-godsons, Donte Maurice Jr. and Dai’on Kyrice Johnson; neice, Kayla Grant; devoted and loving friend, Darren S. Buckner; brothers and sisters from other mothers Aziza Gary, Daryl Napier, Emily McMahon, Michelle Wilson, Sean Shomo, Sharonda Boardley; second mother, Eleanor Brown; and a host of family and friends. The list could go on, for he was well known throughout the Baltimore City and County area.

REGINALD ALBERT ROBINS (REGGIE) was born on March 25, 1966 in Baltimore, MD to Ms. Loretta Robins and Mr. Ray Adams. Reggie received his education in Baltimore City Schools and was a proud, spirited and boastful member of the Paul Laurence... View Obituary & Service Information

The family of Reginald A. Robins created this Life Tributes page to make it easy to share your memories.

Send flowers to the Robins family.