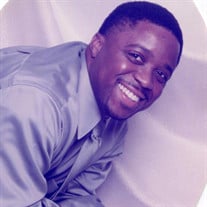 On December 13, 2021, God lifted and carried His son REGINALD LEON BOTTOM Home. Reginald “Reggie” was born September 10, 1970 in Baltimore, Maryland to Samuel Leon Bottom and Brenda Moore Bottom. Reggie was known for his caring and selfless personality. He was always willing to go the extra mile for any and everyone. Reggie always knew the right words to say and how to bring the best out of anyone no matter the situation. No one was ever a stranger. Reggie made friends wherever he went. Reggie graduated from Cardinal Gibbons High School, Baltimore, Maryland. He furthered his post graduate studies at Virginia Union University where he pledged and became a member of Omega Psi Phi Fraternity, Incorporated, Zeta Chapter. Shortly after, he became a member of Prince Hall Free and Accepted Masons, L’Overture 156. Reggie was engaged to the love of his life, Chauntrell Guilford who he had known for 31 years. Together they established a loving home in Chesapeake, Virginia. Reggie worked for the Commonwealth of Virginia, Department of Juvenile Justice where he was able to express his love, devote his time and energy shaping and molding the minds of many adolescents. Reggie dedicated over 20 years of service in the states of Maryland and Virginia. To cherish his precious memory are: a loving and devoted fiancée, Chauntrell Guilford; his beloved father and mother, Samuel Bottom and Brenda Bottom; his loving aunts, Helen Boone, Hazel Parker, Judy Mizell, Channie Willingham, Rita Crocker, Pearline Warren and Angela Williams; his uncles, Glenest Moore, Billy Crocker, Johnny Parker, Vernon Warren and Jack Branch; his great aunts, Werenith Moore and Jessie Moore; fiancée’s parents, Mack Guilford and Erin Sellers; and a host of cousins, other family members, fraternity brothers and friends. He will be sincerely missed by everyone who knew him.

The family of Reginald Leon Bottom created this Life Tributes page to make it easy to share your memories.

Send flowers to the Bottom family.