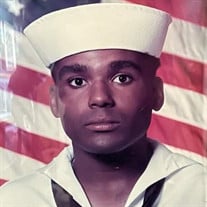 REGINALD GLENN BEARD, son of Hilton and Bessie Beard Sr., was called home by God on Wednesday, April 27, 2022 after a short illness and courageous fight. Reginald had a sweet spirit throughout his illness, he would always say: “Sis, I am taking one day at time, one week at a time, and point towards heaven and say, ‘I am ready’ when God calls me home.” Reginald, affectionately called Reggie, was born on August 8, 1963 in Baltimore, Maryland. He was the sixth child born to Bessie and Hilton Beard Sr. His sisters Deborah and Patricia preceded him in death. Reginald was educated in the Baltimore City Public School System and graduated from Northern High School. Reginald joined the U.S. Navy and received an honorable discharge on May 1, 1992 due to disability. He received the following declarations: National Defense Service Medal; .38 Caliber Pistol Expert; Sea Service Deployment Ribbon; Armed Forces Expeditionary Medal. He loved telling everyone about his Naval adventures. Reginald accepted the Lord Jesus Christ as his personal Savior. Reginald loved watching sports, he loved football (Baltimore Ravens). Reggie had a great sense of humor, always kept you laughing. He loved his family. He loved cooking on the grill and called himself the “Grill Master”. He always respected his father, and always answered him by saying “Yes Sir!” with a salute. Reggie was the youngest of his siblings, and spoiled rotten by them all. He leaves to cherish his loving memory: mother Bessie and father Hilton Beard Sr.; two sisters, Linda (Aaron) Green and Jo Ann (Rodney) Brown; one brother, Hilton Beard Jr.; (two sisters preceded him in death, Deborah and Patricia); nephews, Jermaine, Aaron Jr., Hilton III; greatnephew Jermaine Jr.; nieces, Ashley, Deborah; great-niece, Lashe’; greatgreat nieces, Karter and Layla; special friends, Kyle and Calvin; aunts and uncles and a host of cousins and friends. A devoted nephew, Jermaine (his personal barber); and a devoted friend, Leatrice Russell.

REGINALD GLENN BEARD, son of Hilton and Bessie Beard Sr., was called home by God on Wednesday, April 27, 2022 after a short illness and courageous fight. Reginald had a sweet spirit throughout his illness, he would always say: &#8220;Sis, I... View Obituary & Service Information

The family of Reginald Glenn Beard created this Life Tributes page to make it easy to share your memories.

Send flowers to the Beard family.