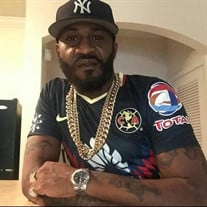 Raynard Thomas Booker, son of Brenda Jennings and the late Gregory Booker Sr., was born on September 8, 1976, in Baltimore, Maryland. He was the youngest of two children. On July 25, 2021 Our Heavenly Father called him to rest, he peacefully slipped away into his loving arms. Raynard, affectionately known as “Nard” or “Mr. 55,” began his education in the Baltimore City Public School System, graduating from Mergenthaler High School. After graduating he furthered his education, by attending the Community College of Baltimore City. Nard was a man with many talents. His talent and passion for music led him to create a music group, “B.M.W.” with his brother Bleu and his friends. He also formed record labels Brawler Records and P.H. Music Group where he managed and signed artists. He had a drive that allowed him to be affective in planning and organizing enterprises. He had a strong aesthetic sense that was reflected in his possessions such as cars. Nard would purchase old school vehicles to rebuild and customize them. Even as a toddler he showed a strong love for all cars, trucks and motorcycles. He would take matchbox cars apart and put them back together. He engaged in crafts that challenged his abilities where he could make use of his physical and mental energies. He loved his family, always driving to visit and spend time with them. He loved children so much he had 8 of them; 5 boys and 3 girls. Nard, was a man who took pride in remaining true to himself. He was who he was unapologetically. He was an avid traveler, taking road trips to different states with his family and friends. When he wasn’t dancing up a storm, you could find Nard dominating every debate and aggressively defending his opinions whether they were correct or not. His love of life and adventurous spirit ushered him into new ideas that pushed him to forever seek knowledge. He was an ambitious, focused and determined man. His presence and love will truly be missed by all who had a relationship with him. He was loved more than words can express. He did not leave this world without leaving his mark. He did it “His Way.” He leaves to mourn his mother, Brenda Jennings, his brothers Gregory Booker Jr. (Bleu), & Damien Booker, his sisters Shericka Fuller & Ingrid Booker-Hill (Buffie), 8 children, Tramar, Kayla, Taj, Niya, Meadow, Tru’ell, Kingston & Romelo, 2 grandchildren, Tramar Jr. & Major, nieces, nephews and a host of other family members and friends.

Raynard Thomas Booker, son of Brenda Jennings and the late Gregory Booker Sr., was born on September 8, 1976, in Baltimore, Maryland. He was the youngest of two children. On July 25, 2021 Our Heavenly Father called him to rest, he peacefully... View Obituary & Service Information

The family of Raynard Thomas Booker created this Life Tributes page to make it easy to share your memories.

Send flowers to the Booker family.