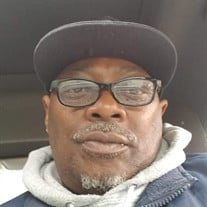 RAYMOND McKINLEY GEE gently and quietly on the wings in the evening of Monday, November 29, 2021, was lifted from labor to reward and entered Heaven’s Gate. Raymond was born in Baltimore, Maryland on October 21, 1956 to Roosevelt McKinley Gee and the late Florence Ervin Gee. Raymond was known affectionately as “Man to Be” to his loving mother and from that nickname birthed “Maybe”. Other family members called him Dad, Grandpa, Pa-Pa, Uncle Maybe, Uncle Be-Be and colleagues simply referred to him as Ray. Raymond received his formal education at Mergenthaler Vocational Tech High School and graduated in 1974. He held numerous jobs until his great opportunity came in 2002 with the Carelink (Star) Program in Norristown, PA. Raymond’s frst position was Residential Counselor and then he was promoted to Shift Supervisor. He was employed with Carelink (Star) for 19 years and planned to stay until his retirement. Raymond’s love for humanity fueled his great desire to share wisdom and assist his family, friends and co-workers when necessary. Raymond’s greatest legacy and love is his children, grandchildren and great- grandchildren. His passion was spending time with his family. His dad is his road dog. Raymond enjoyed going to watch his grandson and great-nephew play football with the Parkside Warriors. Raymond’s favorite pastime was cooking on the grill, singing “oldies but goodies” and he was a die-hard Raven fan. Raymond was an enthusiast for cars, remember his money green glowing Monte Carlo, with leather money green interior, sunroof, silver rims, continental front and back, gangsta whitewalls, diamond in the back and tv antennas. He was diggin’ the scene with a gangsta lean. Can u dig it? Raymond was a devoted family man, a hardworking employee, wonderful friend and caring individual. He was well loved and adored by everyone he came in contact with and will be truly missed by all whom he touched. Raymond was preceded in death by his mother Florence Gee and his brother Alfred Gee. Raymond leaves to celebrate and cherish his life memories: his devoted father, Roosevelt Gee; his loving children, Raymond Gee, Nakessha Witherspoon and Rita Wallace; his precious grandchildren, Tatayana Gee; Raymond Gee, Jr., Brianna Gee, Demetrius Gee, Jaden Wood, Stephan Gee, Josanna Amos, Katrell Boyd, Seniyah Gee, Justin and Jayden Turner (our twins), Jordan Gee, Angelo Smith, Stephon Boulware, Jr., Christian Williams, and Jeffrey Wallace, Jr.; his adorable great-grandchildren, KoriAddison Gee, Jurell Layne, Jumell Layne, Demetrius Gee, Jr., Di’milo Gee, Braylen Gee, and Ramzi Punnette; his devoted siblings, Veronica Gee, Natalie Gee, Emmanuel Gee, and Gerard Gee; his caring sister-in-law, Crystal Gee; and a host of aunts, uncles, nieces, nephews and cousins; also his extended family members, Denise and Donnell Mann.

RAYMOND McKINLEY GEE gently and quietly on the wings in the evening of Monday, November 29, 2021, was lifted from labor to reward and entered Heaven&#8217;s Gate. Raymond was born in Baltimore, Maryland on October 21, 1956 to Roosevelt McKinley... View Obituary & Service Information

The family of Raymond M. Gee created this Life Tributes page to make it easy to share your memories.

RAYMOND McKINLEY GEE gently and quietly on the wings in the evening...

Send flowers to the Gee family.