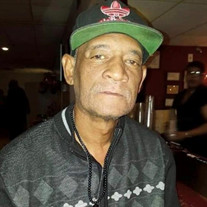 Raymond “Chicky” Berry was born on May 11, 1958 in Baltimore, Maryland. He was the son of the late Gladys H. Berry and William Wilson. Although his father was in his life, chick was raised by his, mother Gladys, and his stepfather, George “June” Scott. Chicky received his formal education in the Baltimore City Public School System and life experiences taught him so much more. After high school, Chicky took a position at ADM (Harte-Hanks) and later moved on to work for Von Paris Van Lines. Chicky ended his work career in 2021. At the Delta by Marriott Hotel when he retired during the COVID pandemic. Chicky was known and respected as a very kind and thoughtful person. He served as a caregiver for Gladys and June during their time of need. Chicky was best known for kind heart and helpful nature. Neighbors had no problems asking him for help when needed. He loved and spoke so proudly of his son, Ray. his relationships with his nieces and nephews was very special as demonstrated in his relationship with great-nephew Shamar Foster. He was easy to talk to and a great listener who encouraged us all with, “It’s going to be alright, just watch.” Chicky loved sports, especially basketball, and was a good baseball player himself. He also enjoyed watching a good western on television. Watching a mid-day western is when he usually called to check on family and friends during the pandemic, just to make sure they were okay and to offer a word of encouragement. Chicky was proceeded in death by his 3 brothers (Leonard, Stephen, Ronald “Eyez”), nephew Tony JonesAnd niece Trina Scott. Chicky transitioned from life on Monday, March, 7, 2022 He leaves to cherish many wonderful memories, his Raymond, Jr.: daughter-in-law, Tiffany; granddaughter Skylar; devoted sister and best friend Sheila Scott, sister Denise Mabry: brother Reginald Scott; lifelong friend, Harold Lee Alston, and a host of nieces, nephews, adopted children, and friends and family. Respectfully submitted, The Family

Raymond &#8220;Chicky&#8221; Berry was born on May 11, 1958 in Baltimore, Maryland. He was the son of the late Gladys H. Berry and William Wilson. Although his father was in his life, chick was raised by his, mother Gladys, and his stepfather,... View Obituary & Service Information

The family of Raymond (Chicky) Berry, Sr. created this Life Tributes page to make it easy to share your memories.

Send flowers to the Berry, family.