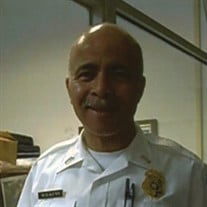 RALPH LEO WILKENS, born May 6, 1948, the fifth birth of Ralph and Rita Wilkens were surprised with twins, his sister Rosalie. Ralph was educated in the Baltimore City public school system and graduated from the Community College of Baltimore with an Associate degree in medical health technology. He received numerous awards, Distinguished scholar, National Deans list and he continued educating himself attending the officers school for the United States Postal Service. Ralph led a life and career of service. He worked various jobs in the service industry, including Bethlehem Steel and Church Home and Hospital. Working as a security guard at Church Home and Hospital lead him to his career at the United States Postal Service. While at the United States Postal Service, he worked as a mail carrier and advanced his way up to a police lieutenant with honors. After more than 30 years of service, he retired from the United States Postal Service. Ralph loved spending time with his family, traveling, listening to music and attending plays. He was also a Jazz enthusiast. He especially loved hanging out with his children, siblings and his favorite past time of flying kites. He really appreciated the little things in life. While he was very particular and stubborn at times, he was always willing to compromise to make others happy. After a two year battle with Mesothelioma, Ralph was called home. He passed away in his home surrounded by his children and his siblings. Ralph was a father of six. He was preceded in death by his eldest son Michael Anthony Wilkens. He is survived by his five remaining children; Ralph, Stanley, Teresa, Nikkia and Ivory. He has eight grandchildren and several great grandchildren. He is also survived by his twin sister Rosalie; his sisters Maxine, Sylvia, Rita, Lezlie and his brothers Stewart, Clifford and Craig. He also leaves behind one aunt and a host of nieces and nephews, cousins and friends. He will join his mother Rita, sister Nancy and brother Stanley in heaven

RALPH LEO WILKENS, born May 6, 1948, the fifth birth of Ralph and Rita Wilkens were surprised with twins, his sister Rosalie. Ralph was educated in the Baltimore City public school system and graduated from the Community College of Baltimore... View Obituary & Service Information

The family of Ralph Leo Wilkens created this Life Tributes page to make it easy to share your memories.

Send flowers to the Wilkens family.