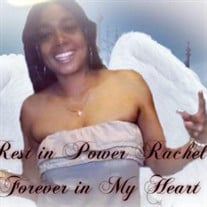 Rachel Nichelle Johnson, beloved daughter of Mary R. Johnson and Rikki Herbert, Sr., was born on December 6, 1977, in Baltimore, Maryland. She was called from earth to glory on January 27, 2022, after a short illness. Rachel was known by many names, Lu-Lu, Lukie, Fat Rat and Murm to name a few. She received her education through The Baltimore City Public Schools System. She worked various jobs throughout her time. Her best pastime was enjoying her family, friends, and neighborhood. She loved her family and was always the life of any party. In 1996, Rachel gave birth to her one and only child, Breshae Lanae Gooda, whom she referred to as "Gooda". Rachel and Breshae enjoyed many joyous and memorable moments together filled with laughter. She enjoyed laughing and would constantly joke and make up names for people. Rachel lived everyday just how she wanted and didn't miss an opportunity to enjoy herself and others. She welcomed anyone she met with her radiant smile and those beautiful white teeth. She had a heart of gold. Rachel was a very energic, lovable, and fun child with a welcoming spirit. She loved the Lord and would often sit in the kitchen with Grandma Mary, listening to gospel hymns until Grandma moved to her heavenly home in 2009. Rachel was preceded in death by her brother, Rikki L. Herbert, Jr.; grandparents, Edgar (Zeke) and Mary L. Johnson; and several aunts and uncles. Rachel leaves to cherish her memories: The loves of her life; her daughter, Breshae and grandson, Logan; her parents, Rikki and Mary; one devoted sister, LaDonna; one devoted brother, Christopher; three nieces, Destiney, Ayanna and Kennedi; one nephew, Christopher, Jr.; one grandmother; Betsie Patterson; seven aunts, Janet, Ethel, Donna, Bridgette, Rowena, Darlene, and Tanya; two uncles, Edward and Jeffrey; one godson; Daesean Jenkins (Doodles); two goddaughters, Ladajah and Mia Campbell; her best friends; Vivian Cromwell and Latrice Giles; a host of cousins and other close friends.

Rachel Nichelle Johnson, beloved daughter of Mary R. Johnson and Rikki Herbert, Sr., was born on December 6, 1977, in Baltimore, Maryland. She was called from earth to glory on January 27, 2022, after a short illness. Rachel was known by many... View Obituary & Service Information

The family of Rachel N. Johnson created this Life Tributes page to make it easy to share your memories.