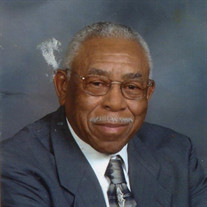 Legacy of Life Pleasant E. Thompson, Sr., 89, of New Kent passed away peacefully on March 9, 2022. Pleasant was born on September 18, 1932, in New Kent, Virginia to the late Littleton and Maude Thompson. He attended George W. Watkins school. At an early age, Pleasant accepted Christ and joined Lebanon Baptist Church. He loved being an active member of the church and singing in the church choir. He would quickly showcase his baritone voice without hesitation anytime someone would ask him to sing. He was united in matrimony to Lily Mae Miller (deceased) in May of 1954/ Their union was blessed with four children, Gayle, Darleen, Pleasant Jr. (deceased), and Valorie Pleasant enlisted into the United States Army and was deployed to North Korea where he served in harsh conditions with the help of his Holy Father. He was a proud veteran of the Korean War and proudly wore his veterans hat reflecting his honor to serve. When Pleasant returned home to the states, he found employment working at the Shipyard with Ethyl Corporation. He later worked for Dominion Virginia Power from which he retired as a Machinist in 1992. Used to keeping busy, Pleasant didn’t remain fully retired for long. After one year of being idle, he found part-time employment with Ukrops, then Martins, enjoying interacting with the many people he encountered. He worked there another 25 years until he retired fully in 2015. Pleasant was a member of the VFW lodge in Mechanicsville. He loved playing bingo there on Wednesdays and Fridays with all his friends. He was an avid Washington Football Team fan and loved baseball. He loved to show off his dancing skills and was the life of the party wherever he went. He was a kind loving father who was always there for his family and children. He led by example and was a role model of what a father should be: God-loving, strong, kind, and patient. He constantly instilled life lessons in his children.He was a gentle grandfather to his grandkids and an all-around hero to his entire family. Pleasant leaves to cherish his memory: 3 daughters, Gayle Thom (James), Darleen Hines (Eric), and Valorie Thompson-Robinson (Eric); grandson, James A. Thom, IV; granddaughters, Katrina Loperl and Janna Thom; great-granddaughter, Mariah Chanel Smith; brother-in-law, Floyd Miller, Sr.; honorary daughter, Daphne Patron; many beloved nieces and nephews. He also leaves cherished memories to his caretakers, Dee, Shirley, and Linda who took care of him daily for over two years at his home. God saw the load was getting heavy and the hills were hard to climb So, he closed his weary eyelids and whispered, “Peace Be Thine” With our love! The Family

The family of Pleasant E. Thompson, Sr. created this Life Tributes page to make it easy to share your memories.

Send flowers to the Thompson, family.