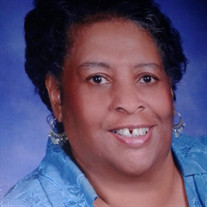 "I was glad when they said unto me, Let us go into the house of the Lord" Psalm 122:1 Pearl Annette Brown, daughter of the late Eugene and Agnes Brown, was born September 30, 1948, in Baltimore, Maryland. On Tuesday, November 9, 2021, God touched her hand and called her home to rest. Pearl was affectionately known as "Annette" by relatives and friends. While it is believed by some that she had a slight preference for the name Annette, she was informed in no uncertain terms by her kindergarten teacher that in her class, she would be called Pearl. Pearl accepted Christ as her personal Savior at an early age. She was a member of Whitestone Baptist Church under the pastorate of Dr. Elmore E. Warren and Pastor J Kevin James. Pearl graduated from Morgan State University in 1971 with a degree in Political Science. She went back to school to obtain educational credits in Accounting which led to her long career with the federal government. Pearl retired from the U.S. Department of Health and Human Services (DHHS), Division of Payment Management in 2009 after 37 years of federal service. At DHHS, Pearl led a team of Accountants in the University and Non-Profit Payment Branch, where she managed federal grant disbursements averaging over $1 billion dollars per day. Pearl mentored a number of staff members during her time at DHHS.and her impact and teachings remain to this day, several years after her retirement. Despite working in Rockville, Maryland, she always remained a Baltimore area resident. She would work long hours, then bare the heavy traffic to return home and spend time with her mother and father. Pearl was an avid traveler, visiting many places throughout her life, both domestic and abroad. Whether it was a festival in Miami or New Orleans, a cruise to the Caribbean or a bus trip to Times Square, she made it a theme of her life to see the world. She shared her love of travel with her family as Pearl would generously take her nephews, Christopher and Lance, on an annual summer vacation. As soon as they would return home from one vacation, she would encourage her nephews to start thinking about next year's destination. After retirement, Pearl joined a cherished "lunch group" that would meet frequently to visit new and popular restaurants in and around Baltimore. As explained by Jean Harris, a lifelong friend: “The lunch group started in 2005 when I and two friends retired from the federal government and decided to meet monthly for lunch. We never picked a name and it was always just the lunch group. As more of our friends retired, we invited them to join the group. I invited Pearl to join the group when she retired in 2009. Even though all of the lunch group worked in Baltimore and Pearl worked in Rockville, she became one of us. At lunch we would talk about our former co-workers. The lunch group is very opinionated, and we would get into serious discussions about the government and political issues. We were all on the same page and since Pearl was one of our MSNBC watchers, it kept the conversations lively. We also talked about vacations since all the members of the group loved to travel.” The lunch ladies were Carolyn Mello, Wanetah Wilkins, Brenda Rigby, Sarah Smalley, Vera Dillard and Jean Harris. Pearl was an avid fan of the Baltimore Ravens, though she would admit she couldn’t bear to watch all of the games due to nerves. She also enjoyed watching QVC, HGTV and the Food Network. Above all, Pearl loved her family. Through family vacations and celebratory family dinners, she leaves behind a wealth of memories for her family to cherish and remember her by. Pearl leaves to celebrate her life, her brother and sister-in-law Stanley and Sheila, of Harrisburg, Pennsylvania, her nephews Christopher (Tania) and Lance (Simone), her great nephews Mason and Landon and her great niece Kendall, her Aunt Earlene Williams of Brooklyn, New York, her special friends Patricia Taylor and Jean Harris, her sorority sisters at Sigma Gamma Rho and a host of cousins and friends.

"I was glad when they said unto me, Let us go into the house of the Lord" Psalm 122:1 Pearl Annette Brown, daughter of the late Eugene and Agnes Brown, was born September 30, 1948, in Baltimore, Maryland. On Tuesday, November 9, 2021, God touched... View Obituary & Service Information

The family of Pearl Annette Brown created this Life Tributes page to make it easy to share your memories.

&quot;I was glad when they said unto me, Let us go into the house...