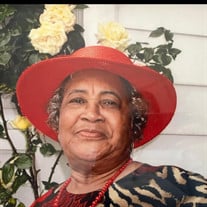 Reflections of Life Wednesday, February 16, 2022, the Lord chose from his lovely garden our Beloved, Deaconess Pearl Virginia Webster Hunter. She was born on December 4, 1925, in Henrico, Virginia to the late Clinton Odell Webster, Sr., and Ruth Virginia Robinson Webster. During her high school years, while being the only girl, Pearl was s.ent to live with her Aunt Lillian Shepperson in Richmond City, where she attended public school for a more inclusive education and graduated from Armstrong High School. Preceding in death were her parents, her husband, Deacon Earl J. Hunter, Sr.; eight brothers, Clinton, Jr., Harvey, Earnest, Thomas, William, Walter, Lloyd, Harry Webster; daughter, Lillian "Evonne" Hunter; and great-granddaughter, Shauna Williamson. Pearl was a Girl Scout as a young girl, and often quoted, "I learned that you had to work with and use what you got." She accepted Christ at an early age at Potomoi Baptist Church. There she met Earl Joseph Hunter, Sr. at Homecoming Services, and on July 31, 1943 were united in marriage and blessed with five children. Having joined First Union Baptist Church under the pastorate of the late Reverend Emmanuel Kent, she was a member for over 70 years. She served First Union Baptist Church faithfully and was a committed member of the Senior Choir, Women's Ministry, Senior Missionary Ministry, and Deaconess Ministry. She became the first Chairperson who initiated the Kitchen Committee, which in later years became known as the Hospitality Ministry. Often sharing oral history, she reminisced of how she, her husband, and children worked in any way they needed help at church. This included church clean-up duties, grass cutting, purchasing curtains and chimney tin plates for the woodstove. She thrived in being a member of the Deaconess Ministry, serving as the first young Deaconess at the time with her Elders, and remembering gently washing and handling the sacred elements for Communion Sundays. Other affiliations included the Chickahominy Baptist Association Deacon & Deaconess Conference, NAACP, and "The Jolly Bees." Until her death, Pearl was the eldest member and "Mother" of FUBC. Pearl and Earl shared 40 wonderful years together until his death in 1983. They became the proprietors of Creighton Lake, which was a recreational park for African-Americans during that time. She then worked at the East End Elementary School, of which years later new Pole Green Elementary School was built on site. She recalled how the Principal allowed her and the FUBC Kitchen Committee use of the cafeteria to prepare food for Homecoming Services. "Big baskets of greens, string beans, ham, etc.." were fixed. Early Sunday morning before church opened, they would bring the food back to FUBC "serving from the outside, little kitchen, and basement." She worked for A.H. Robins for many years as a cafeteria server. "When I came in at 8 o'clock in the morning I made 160 gallons of regular coffee, and I usually had to make more gallons for the afternoon break," she pointed out in a featured article about her. After leaving the outside workforce, Pearl continued to work hard as a Farmer's wife, mother, and grand­ mother. "Ma Pearl" as known to many, was described as a virtuous woman. She was a very loyal and devoted wife, mother, grandmother (Nana), great-grandmother, sister, friend, confidante, spiritual mentor, good listener and family-oriented person. She loved her family and once she loved you, you became her family. -As she would always say, "Keep the family and yoke together; don't break that yoke."­ Leaving to celebrate loving memories are her four children, Earl Hunter, Jr. (Francine), Stella Henderson (James), Janet Shelton (Julian, Sr.), and Wendy Hill; seven grandchildren, Tamie Williamson, Julian Shelton, Jr. (Beena), Telesia Greene, Mark Hunter (Jodi), Brian Hunter, Eric Hunter (Erika), and Danah Telfaire (Kenno); twelve great-grandchildren, Michael, Jasmyn, Sydney Williamson, Cameron Davis, Jaylon Greene, Shyli, Jace Shelton, Jaci, Brandon, Cristian, Zoe Hunter, and Kamden Telfaire; five great­ great-grandchildren, Aryana, Matteo, Mylah and Ava Williamson, Dakota Sykes; one brother, Robert Webster, Sr. (Nereida); one sister-in-law/cousin, Elnora Hunter; a loving and devoted caregiver, Sister Hattie Weatherless; many nieces, nephews, cousins, and friends.

Reflections of Life Wednesday, February 16, 2022, the Lord chose from his lovely garden our Beloved, Deaconess Pearl Virginia Webster Hunter. She was born on December 4, 1925, in Henrico, Virginia to the late Clinton Odell Webster, Sr., and... View Obituary & Service Information

The family of Deaconess Pearl Virginia Hunter created this Life Tributes page to make it easy to share your memories.

Send flowers to the Hunter family.