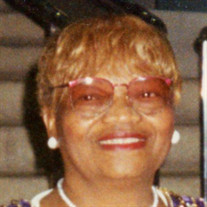 Pauline Pindell Knight, daughter of the late Daniel Alexander Pindell and Ella Louise Jones Pindell, was born April 12, 1924 in Anne Arundel County, Maryland.After a brief illness, she departed this life on November 28, 2021. Pauline's brothers Arthur, William and Purnell preceded her in death. She was educated in the Anne Arundel County School System, and worked as a seamstress prior to her retirement many years ago. Pauline was a believer, and trusted in the Lord. She was a caring, kind woman, who always put family first. She was a loving mother, grandmother, great-grandmother, and great-great-grandmother. She will surely be missed. At family gatherings she was considered the life of every party. Whether you asked or not, Pauline was always willing and able to share her opinion concerning any topic. She was never afraid to speak her mind. Pauline was a long-time member of the Improved Benevolent and Protective Order Elks of the World Inc. She enjoyed being an active member for many years as a Daughter of Zorah Elliott Temple #717. She is preceded in death by her husband, Albert Knight, and sons, Benjamin Bassett Knight, and Sidney A. Knight. Pauline leaves to cherish her memory: three daughters, Arleathia Norman, Sheila Knight Gordon and Bridget Knight; son-in-law, Tony Gordon; twenty grandchildren, a host of great-and great-great-grandchildren, other relatives and friends, neighbors, and her feline companion, Barnaby Jones Knight.

The family of Pauline Knight created this Life Tributes page to make it easy to share your memories.

Send flowers to the Knight family.