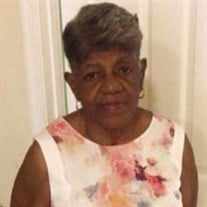 Jesus said to her, "I am the resurrection and the life. Whoever believes in ME, will live, even though he dies, yet shall he live, and everyone who lives and believes in ME shall never die." Keep her in your hearts for eternity. Pauline Delores Henson, affectionately known as Bitsey. Daughter to Lena Henson and Alvin Smith was born on March 25, 1938, in Baltimore, Maryland. She received her education in the Baltimore City Public Schools System. Bitsey enjoyed sewing, she perfected those skills at London Fog where she was employed. In her leisure time she would enjoy her days at home listening to her favorite soul music, playing cards and cooking for her family. If you ever had a chance to visit her home, you could count on leaving with a full belly. Her loving personality shined through; she loved her family unconditionally. Kindness was her gift, but it you crossed her, you would be well aware. Those moments were rare. Feisty, yet a lovable soul, to know her and everyone showered her with love. God said, "Do not let your hearts be troubled. You believe in God, believe also in Me. My father's house has many rooms; if that were not so, would I have told you that I am going there to prepare a place for you? And if I go and prepare a place for you, I will come back and take you to be with me that you also may be where I am." On July 11, 2021, after a lengthy illness, Bitsey was called home and gained her wings to eternal paradise. Proceeding her in death, her mother, Lena Henson; father, Alvin Smith; lifelong partner, Ollie (Daniel) Wattie; two sisters, Helen Dukes, Edna Smith; two brothers, Gregory Henson (Rocky), Leslie Hall (Jitterbug); son, Leander Holland (Ponnie); one sister-in-law, Mary Hall; one brother-in-law, Jerry Dukes; five nephews, Kevin, Leslie, Rodney, John Jr. and Jerry Jr. Bitsey leaves to cherish her memories: her children, Darlene, Yvonne, Sharon Holland and Joann and Daniel Wattie; one brother, John Hall; one sister-in-law, Brenda Hall; eighteen grandchildren, Lanair, Shamere, Lamar, Yolanda, Ebony, Danyelle, Janelle, Darrell, Shaneeka, Natarsha, Julius, Davonta, Natiesha, Dwarne, Ramont, Daniel, Rashard and Patah; twenty-five great grandchildren and fourteen great great grandchildren whom she adored; four nieces, Lolita, Tonya, Dionne, Pamela; one nephew, Dominick; and a host of cousins, loved ones and friends.

Jesus said to her, "I am the resurrection and the life. Whoever believes in ME, will live, even though he dies, yet shall he live, and everyone who lives and believes in ME shall never die." Keep her in your hearts for eternity. Pauline Delores... View Obituary & Service Information

The family of Pauline D. Henson created this Life Tributes page to make it easy to share your memories.

Jesus said to her, &quot;I am the resurrection and the life. Whoever...

Send flowers to the Henson family.