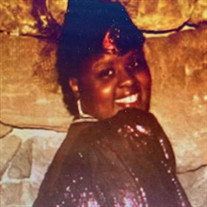 PATRICE ROSEZERIA JOHNSON was born on January 18, 1965, in Baltimore, Maryland to Emmett Johnson Jr. and to the late Ella Louise Johnson. On May 26, 2021, she was called home to GLORY after a lengthy health battle. Patrice was her birth name but she was also known to her family and friends as “Trecy”. As a young child she attended First Charity Baptist Church under the leadership of the late Pastor Prince Arthur Kearney. There she accepted JESUS CHRIST as her personal savior and was baptized. She was a member of the P.A.K Ensemble Choir and then joined the adult choir along with other ministries. Her most favorable ministry, she would assist her mother in making hats for members of the church. Trecy attended the Baltimore City Public Schools which included Leith Walk Elementary, Chinquapin Middle, and Northern High School. She graduated from Northern High Schoo #402 Class of 1984. She was the class Historian and served on a host of other activities. After graduation, she immediately was employed by the Hyatt Regency Hotel Baltimore Inner Harbor for many years in Stewarding until her health would not allow her to continue. While working at the Hyatt, Patrice met her best friend “Alice”. The two ladies formed a sisterlike bond that stretched over a span of decades. Her passion was sewing, cooking, arts and crafts. You could almost always find her making flower arrangements, doing home decor, making decorative pillows, painting candle holders, or cooking up something good. She loved making her own clothes to wear, something that she learned from her mom. Often you would find her down the street at Joyce’s house in the flurry mix of the prom season which she loved so much. She was a self-proclaimed mother to all of her sisters. She created the Modern Dance Group called “THE ANGELS” which her sisters were a part of. Her childhood memories of Evesham Avenue and friendships shared will forever remain a special place in her heart. Patrice and her beloved husband Cornell were married by the late Zachary C. Jeffers of Agape Christian Baptist Church on April 7, 2007. The two then joined Graceway Church located on Security Blvd. Then later in 2017, the couple joined Rosedale Baptist Church located on Philadelphia Road where she was an active member before her passing. She has served on many ministries within the church and was loved by all. She was preceded in death by her beloved mother Ella L. Johnson and her grandmother Beatrice Cannon, and former husband George Bassett. Patrice leaves to cherish her memory: her husband Cornell; two sons, Cornell Jr. and Dorien; father, Emmett; sisters, Martina, Benzella (Timothy), Vincia, Christina (William) and Amanda (Rodney Sr.); nieces, Chanell (Tuan), Christian, Christina, Crisshea, Crishawna, and Miracle; nephews, Joshua, Vincent, Blake, Rodney Jr., and K-Sean; special cousin, Keontae,; greatnieces, Cianna, Cahlia, Crissette, Canden and Charm; great-nephews, Tejohn, Kaleb, Cebastian, Colin, Christian, VernDeep, Vance, Victor and Keaton; along with a host of other family and friends

PATRICE ROSEZERIA JOHNSON was born on January 18, 1965, in Baltimore, Maryland to Emmett Johnson Jr. and to the late Ella Louise Johnson. On May 26, 2021, she was called home to GLORY after a lengthy health battle. Patrice was her birth name... View Obituary & Service Information

The family of Patrice R. Bassett created this Life Tributes page to make it easy to share your memories.

Send flowers to the Bassett family.