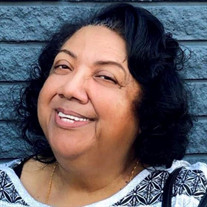 We celebrate the life of beloved, wife, mother, grandmother, great-grandmother, sister, aunt, cousin and friend DEBORAH PARKS, who peacefully passed into her eternal rest with her Lord and Savior Jesus Christ on February 9, 2022. Deborah, affectionately known as Granny by her grandchildren, was born on May 14, 1949 in Newburgh, NY to George Pete Sr, and Lillian Pete-Washington who preceded her in death. Deborah received her education from the Newburgh Public Schools and graduated from Newburgh Academy High School in 1967. She spent most of her early years in Newburgh, NY, where she began her spiritual journey with Christ. Deborah would later on become a lifelong member of Christian Life Church in Baltimore, Maryland. Deborah was married twice in her lifetime. Her union with Paul Jones blessed her with her daughter Denise Jones who preceded her in death. Deborah would later move to Baltimore, Maryland where her union with Virgil Parks blessed the a son, Bobby Lee Parks. She was also blessed with five bonus children for Virgil's previous marriage; Sonia, Braddock, Derrick, and two more who preceded her in death, Virgil Jr. and Marcus Sr. A loving, caring, and hard-working woman is what Deborah was to all that knew and loved her. She had many jobs in her lifetime and she would eventually retire from Woodstock Job Corps as a Supervisor and Head Chef in 2016. After her retirement, she lovingly and faithfully cared for her mother and her husband of 42 years. Deborah leaves to cherish her memory: her sister, Gwen Buxton (Johnny); brothers, Dino Pete (Doran Pete preceded her death), George Pete Jr. and Angelo Pete; her children, Bobby Parks, Sonia Ratajczak (David), Braddock Parks (Sharon), Derrick Parks (Nadine), 16 grandchildren, 17 great-grandchildren and a host of cousins, nieces, nephews and friends

The family of Parks Deborah created this Life Tributes page to make it easy to share your memories.

We celebrate the life of beloved, wife, mother, grandmother,...

Send flowers to the Deborah family.